This is something I hear and see a lot. Photographers going after the rare subjects and ignoring the common ones. While I understand it and will openly admit that I too get excited when there is a sighting of a rare bird, you can’t forget about those common ones. Because even if it is a common species, if it has great light on it, a good background and is workable, then why not? Especially if you don’t have it in your files. This Willet is a great example. 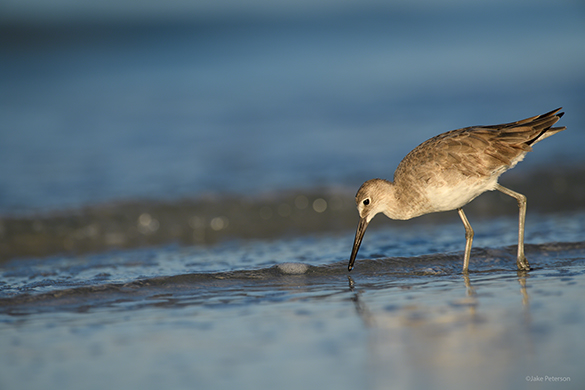 Willets are in the sandpiper family but are much bigger then your average sandpiper. They feed along coastlines for small crabs and crustaceans in the sand. While they are somewhat drab in color, under their wings are magnificent bands of black and white. They are a good bird to work and can be found somewhat readily along North America’s coast lines during the winter. Despite all this they often get overlooked, so much so that while photographing them one morning in Florida, people kept stopping and asking what we were photographing. They go unnoticed which amazes me. Like with all birds it is important to watch the background. Getting low really helps to remove the many annoying elements that lay on the beach.