It’s been five years since I was at Grimes Field, in Urbana, OH and it’s just as good now as it was then. Grimes gathering of B-25’s in honor of the Doolittle Reunion which celebrates its 75th anniversary on Tuesday, is a pretty amazing time. We have 12 B-25’s on the field which is great fun. With B-25’s constantly taking off and landing, it’s like a USAAF medium bomber base here. 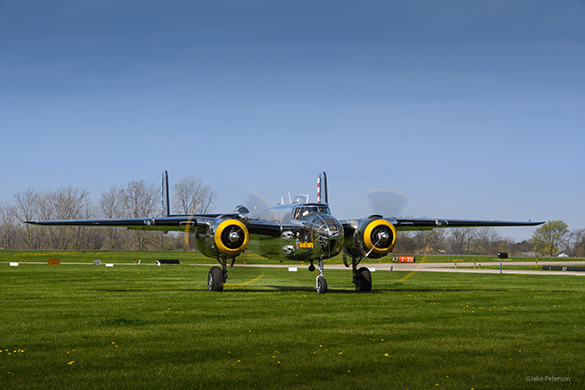 God and Country went up a number of times so that the whole crew at Mid American Flight Museum could get a chance to fly in their B-25. This was taken on the return of one of those flights with the D5 and 70-200VRII. One thing to remember when it comes to taxiing aircraft is that they go a lot slower. So if the plane has a prop and you want to blur it then you have to really bring down the shutter speed. This 1/50th a second and it’s not even a full prop blur.