Belted Kingfisher’s are a common North American bird species but despite that they are among the most annoying subjects to try and get a clean shot of. They are found by rivers, streams, ponds and lakes. Their primary food supply is tiny fish that they dive for. Surprisingly they nest in tunnels along the shoreline that the couple digs out. They are an interesting species but also a frustrating one. 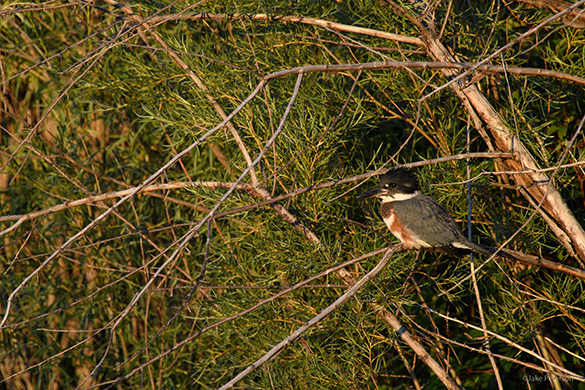 I consider these little birds frustrating because my experience with them has always been that. Despite being so common I still don’t have that one shot of them. Kingfishers are always on the move, they are lightning fast, move from perch to perch and always seem to show up when you don’t have a camera. Rude describes them quite well. In this particular case I had a pair of them alongside this pond. Their nest was nearby since they never left the area. While this one individual was cooperative he picked the worst branch to pose on. Background is a big deal with any photograph and when it comes to wildlife you have to be really careful of lines going through the back of the animals head. It doesn’t look good. The best way to deal with this is to move slightly left or right to get a cleaner line of sight. Well this little guy picked the perfect spot because there was no direction without sticks. The other option is to include the branches to show more habitat and give a better story.