Working inside ay building can be a challenge due to the multiple light sources and the lack of light in certain areas. Aircraft are no different. But aircraft tend to have two benefits going for them, they are made of metal which is naturally a reflective surface and most aircraft are stored within a big open white hangar, which acts as a natural light bouncer. Now not all aircraft are polished aluminum so they might need a little help. 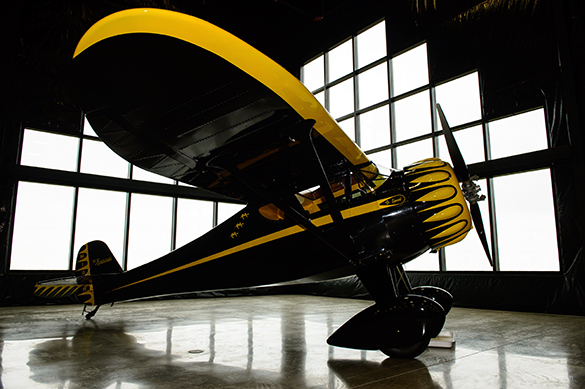 This Monocoupe 110 Special was built back in the 1930’s-1940’s as a sporty race plane. Despite its max speed of 185mph it’s actually a rather unsafe aircraft due to its lack of visibility and high wing load. Not many exist today but the ones that do are quite spectacular. When you have a black plane inside a dark hangar but with such great graphic detail, you have to stop and capture the moment. In order to due that I needed flash especially with that yellow. Flash was the only way to bring out that color so a simple click with one flash was all it took.