What can I say, this plane is now stuck in my head. You wouldn’t think by looking at it how revolutionary this plane was but the 4-At and 5-AT were big deals when they came out in the late 1920’s. One of the biggest problems with early aviation was getting people to believe that planes were safe. Henry and Edsel Ford did a amazing job to help promote safety and a big part of that was believing in William Stout, the engineer who first came up with the new monoplane design that eventually became the Ford Tri-Motor. While Stout’s original concept for the Tri-Motor was never used, elements were taken off of that plane and were incorporated in the Tri-Motor we know today. One of the biggest was the third engine which was there for safety in case one engine quit and power. Engines back then just weren’t the same as now. 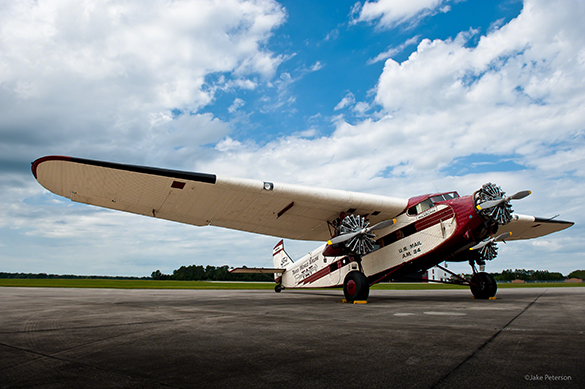 The Tri-Motor became an American icon and sadly few remain. It didn’t help that only 199 were built but due to the planes reliability and tough overall structure over a dozen have survived in various forms of airworthiness. The best known plane is flown by EAA and can be seen at Oshkosh, WI every year. This particular one is owned by Kermit Weeks, part Fantasy of Flight, and is most well known for being in Indiana Jones and the Temple of Doom. More importantly this plane made the first coast to coast flight while owned by Transcontinental Air Transport, the precursor for TWA.