You wouldn’t think this would be a hard photograph to get since all it is is a simple click while the aircraft is static on the ground. But believe it or not it is rather difficult. Basically there are two main reasons why, first is trust. The cockpit is a very personal space for the person flying that plane. It’s a lot like the inside of someones house or car. You just don’t go around taking pictures of those things without asking. Secondly, it’s a matter of safety. Aircraft are hollow, if you look down and back inside a warbird you’ll see a whole lot of empty space. If something is dropped, it’s gone. Not only that but there are lots of little things that could get bumped or broken when you stick a camera inside a plane. So how do you get that shot? 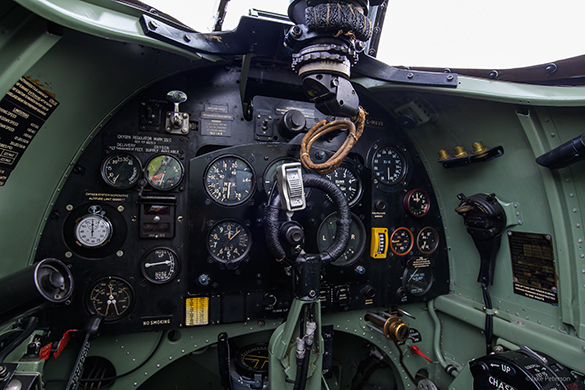 Well for starters you might be wondering is that shot so important to get? Yes it is, because the cockpit is different in every plane and if you’re trying to tell the story of that plane you want to try and capture every detail. When it comes to the shot your best bet is to ask the pilot if you can. Don’t assume, ask first. Make sure you be polite when you ask and make sure you ask when the pilot ISN’T about to go fly. They don’t need that distraction. Next ask them where is it safe to touch and where it is not. If you have a belt buckle take it off. You don’t want that scratching the side of the plane. Don’t lean on the side of the fuselage or on the wings. Be considerate and be sure to thank the pilot when you’re done. It’s actually a fairly easy shot to acquire with just some basic manners.