You can’t go to England and not see some of the amazing architecture that the country has to offer. Much like when you come to the US and you want to visit all the National Parks. Well there are churches and chapels everywhere in England and to try to see them all, I imagine, would take a lifetime but I did get to spend some time in Kings College Chapel in Cambridge. 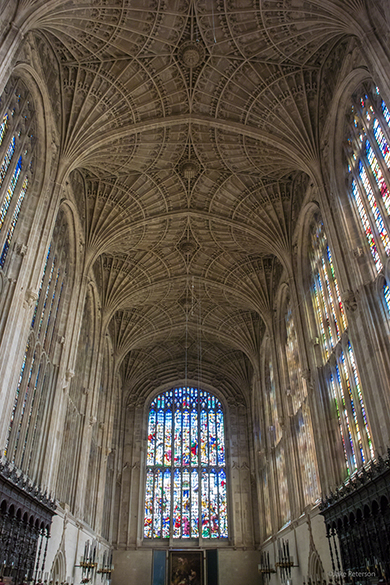 Kings College Chapel was started in 1446 and took over a century to finish. It has the largest fan vault in the world and is a beautiful example of Gothic architecture. When you stand inside you are star struck. The immense detail in every nook and cranny of that building is unbelievable. If you’re a macro photographer you would be in pigs heaven but you might never get the job done because there is so much. While I was standing there taking pictures I was thinking about one major element. Symmetry. I took this photograph many times making sure I had everything as level and symmetrical as I could. It’s very difficult when you’re inside buildings trying to get everything straight and you can’t use a tripod. Be smart, raise your ISO high enough so that you have a decent shutter speed, make sure you shoot closed down a little bit like f8 or f11 to bring out more depth in the details and hold still. Take lots of photos just in case. Now if you google this chapel you’ll find lots of photographs that look just like mine but I don’t care. This was an important memory and I wanted to capture it.