The de Havilland DH.82 Tiger Moth is one the most recognizable biplanes in the world partly due to almost 9 thousand having been built. It was the primary trainer for all Commonwealth Fighter pilots and all of Britain’s top WWII Ace’s once flew the Tiger Moth. The Tiger Moth was Geoffrey de Havillands answer to his own question, how do I make a better plane? His first two were not up to his own expectations and so work began leading to the Gypsy Moth and the monoplane prototype Tiger Moth in which ideas from both led to the true Tiger Moth we know of today. 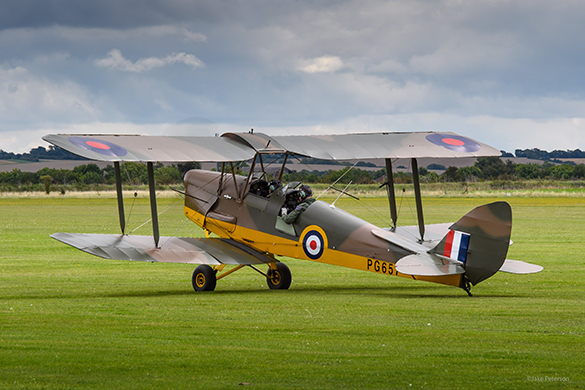 Among the many changes was the moving forward of the wings with the wings slanted back and down to maximize lift. The addition of a more powerful engine, folding doors for both pilot seats and many other changes were adapted into the new design. This lead to the DH.82 becoming one of the principal tail dragger trainers of its day. On October 26th 1931 the first Tiger Moth flew its initial flight. In February 1932 it entered service with the RAF Central Flying School. Geoffrey de Havilland wanted to make sure that the plane was good enough not only for the RAF but for civilian markets as well. He succeeded with Tiger Moth’s being flown in countries around the world as a trainer, a show piece, a crowd pleaser and an all around good flight. 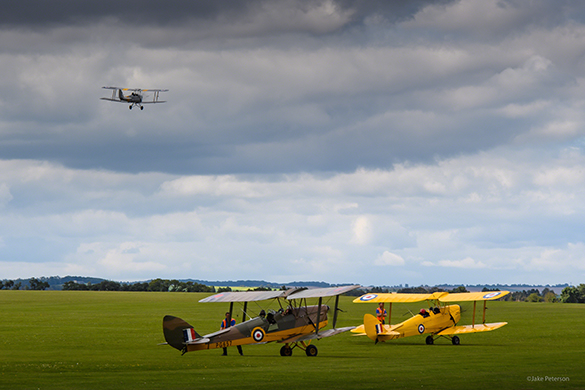 While at Duxford this past August working with a Spitfire MkVb and a Hawker Hurricane, we had the luxury of looking across the field at 3 Tiger Moth’s that were busy flying people back and forth across the English countryside. While most of these flights were rides having been sold to further support the museum, one can’t help but wonder how many of those passengers were flying in honor of relatives that might have trained in that same aircraft.