This post has proven to be quite a challenge as every week it gets harder to decide which plane to talk about. Some planes have such a long, varied history that it makes it almost daunting to find a place to start. This week Dad kind of prompted the topic with his post last Friday on our latest editorial collaboration together in EAA Warbirds with an article on Air to Air Photography. In it he writes about the A-36 Bonanza and how it can be used as a photo ship for photography missions. If you’re interested in air to air photography I highly recommend you go read the article because it covers a lot of the important basics. 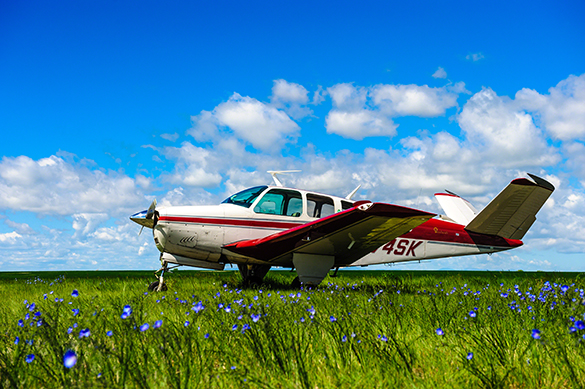 After WWII there was a boom of pilots looking for aviation jobs. Since personnel and commercial use was still limited after the war but growing, many airmen trained to fly fighters and bombers wanted to keep flying. In order to meet demand companies like Beechcraft and Cessna started building personnel affordable private aircraft. In 1947 two all metal aircraft emerged, the Beechcraft A-35 Bonanza and the Cessna 195, designed to target the civilian market. The 195 was a continuation with previous prewar designs, with it’s high wing and radial engine. Today it is considered a classic. The A-35 however was more like fighter plane, with it’s low wing, horizontally designed six cylinder engine and retractable landing gear. The result was a highly desired personnel transport. For twenty five years the “V tail” was in production; however, once the A-33 built in 1959 and the A-36 built in 1968 were launched, the need for the older A-35 fell away and production was cancelled in 1982. Due to the Bonanza’s solid craftsmanship and sixty eight years of being built, plenty of parts remained so several Bonanza’s of all years are still flying today. This particular “V tail” was photographed a couple years back in Lewistown, MT. 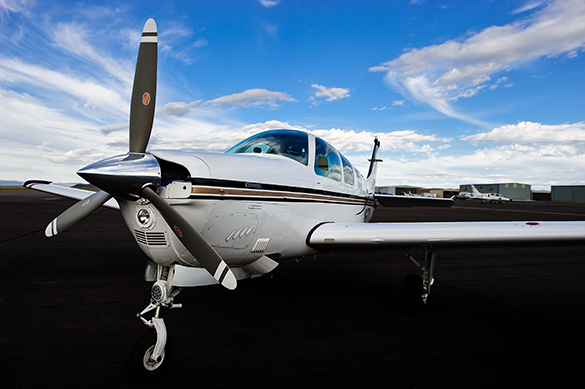 All Bonanza’s share a unique system of bungee cords being used between the yoke, rudder system and ailerons. This enables the pilot to use the yoke to make coordinated turns during cruise flight. However, additional pressure is required on the rudder pedals during takeoff and during crosswind landings. This makes the plane more desirable amongst pilots for a more relaxing flight. With the planes ability to be crewed by one and carry five passengers or three passenger and cargo, the Bonanza of all models remains in supply as several private owners enjoy it’s comforts. Due to over 18,000 having been built over the decades several exist at a wide range of prices. 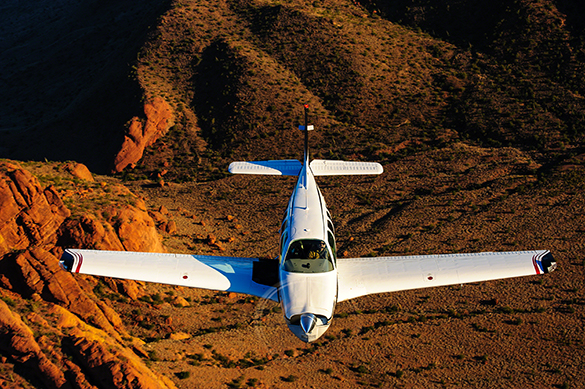 While Bonanza’s can be found all over the country, the one place it can best be seen is in the sky. While most commonly used as a personnel transport or photo platform these days, it was once used for a very unique purpose for the United Sates Air Force in the 1960’s. Known as the QU-22, modified A36’s were designed as unmanned drones to monitor seismic or acoustic sensors along the Ho Chi Minh Trail in Laos in order to see supply and troop movement. No planes were ever able to be unmanned and losses did occur during operation “Pave Eagle.” All accidents from 1968-1970 during the operation were a result of the turbocharged, reduction-geared Continental GTSIO-520-G engine designed for noise reduction. 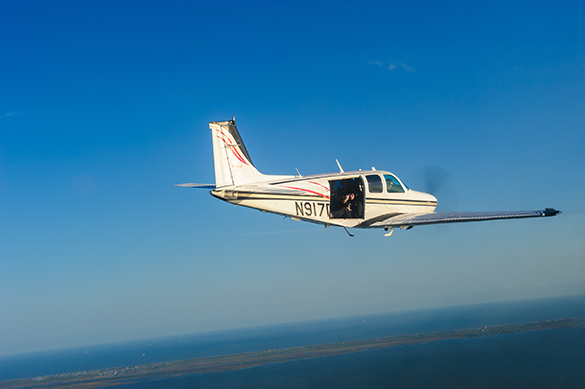 Today the plane serves one purpose, enjoyment. Whether it is the pilots that fly them, like my good friend Kevin who flies his family often in his A-36, for photo missions like this one where you can see Dad instructing the B-25 Betty’s Dream I’m currently flying in too move out further, or even for business trips, the Bonanza is a simple, reliable and enjoyable aircraft for all those that fly.

One thing that i never thought i would be doing is photographing airplanes in flowers. It never really crossed my mind as something that would come up but after working at Lewistown and the grass strips that were there, I kind of want to do more. I’m not sure the flowers just make the planes pretty or if it’s more information in the foreground, but something about that element with the planes makes the image stand out more as opposed to just grass. Maybe it’s just different. Whatever the case, it will be fun to explore more. 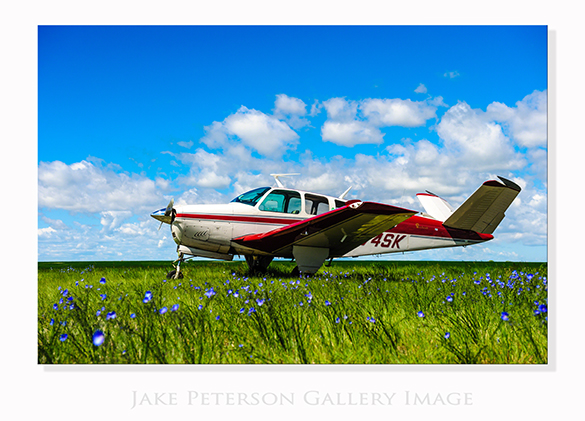 Everyone has probably heard of the rule of thirds while learning the basics of photography. When you compose you setup up your shot so that the foreground, middle ground and background each take up one third of your overall photograph. If you do this you will get the strongest photographs. This is an old rule that has been argued both ways for years! It probably always will be. Well my question is how much detail do you really need in the foreground? Take these shots for example. 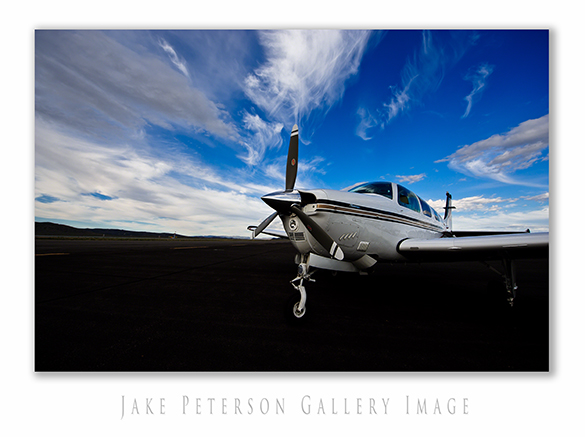 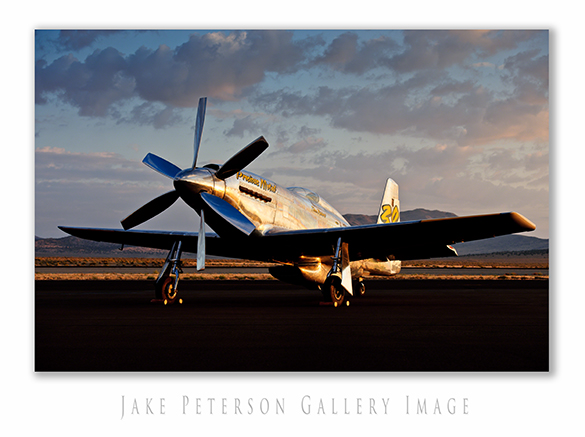 One could argue that the elements in each shot takes up approximately one third of the overall composition. However the foreground in both shots is almost zilch. That’s because the foreground is black. There isn’t much detail in that area. Why does there need to be? It’s a black tarmac runway, who need to know that except for the fact that it is black! The runway in these shots isn’t the subject so why have detail in that area for the eye to get stuck on? See what I’m saying. If you use the rules that established photography and bend them to get the results that you want for images then you become not only more creative but more personal with your shots.

As any good photographer is often doing, I constantly look around for more areas and venues to go shooting. As has become normal with Aviation whenever you show up something turns up. Some of the CAF boys from Phoenix stopped by this past week with “Maid in the Shade,” their wings B-25 Bomber and besides hanging out around that beautiful bird, there happened to be a couple flyins going on, one of which I managed to catch.

In Three Forks Montana the Montana Antique Aircraft Association put on a great little flyin with a surprising amount of local planes. Although not the biggest variety of warbirds, there certainly was a fair number of cessna’s and homebuilts. The Piper 135 and A36 Bonanza are perfect examples of what this flyin had to offer, apart of course from some very nice people. One of the most unique planes there was a 1928 Travel Air which had an absolutely beautiful restoration job, including wood working for most of the body and great attention to the canvas wrapping. Although not the most photographically best scenario with lack of clouds and middle of the day little but still a very fun afternoon.

This past week we had a plethora of B-25’s. It’s not often I get to use that word but it does seem appropriate. This was the largest gathering of B-25’s since WWII! Astonishingly that’s only 20. There are just that few of them left flying. Well the B-25’s weren’t the only gals up there, we had few other visitors in support of the event. Like the Texas Flying Legend boys.

Those guys were great bringing 5 planes for the event! Although known of them except the B-25 was allowed to be at Wright Patterson, due to it being a Air Force base and the government is a little fickle about those things, we had did have some opportunities to see them fly at Grimes Field, Urbana.

The P40K and FG-1D were both of particular interest. Being one of the only FG-1 Corsair’s out there, it’s easy to see why it gets so much attention. Despite the usual four bladed prop this one has only three. It’s also one of the few Corsairs made by Goodyear after the Navy contract with Vought got so big that they couldn’t handle the whole contract for the Navy’s time schedule.

Now of course there wasn’t just Warbirds at Grimes. The field also had its share of kit planes, home built’s and weekend recreational planes. This little red one, which i don’t know what it is, was fun to see come down the taxiway after the B-25’s.

Then there was this favorite. Nothing more than an old fashioned Bonanza. The V tail certainly gives it a different look as apposed to modern A36’s. Personally this is the part that I love seeing about planes. You go to a show expecting to see certain things but you never know what else might pop up.

At this last Pylon Race Seminar, we had an A36 at Reno to work with flown in by two of our dear friends Kevin and Scotty. It’s said to be one of the best shooting platforms there is and we certainly put that to the test. However, after Dad’s Corsair and P51 shoot we had some truly spectacular skies that looked unbelievable with the plane. I mean these are the kind of clouds you dream about when working with planes. If you don’t believe me then your just going to have to look, I ain’t kidding!

Saturday wasn’t the only day of shooting out of the back of a sky van, Sunday proved to be just as much fun, with a twist. The B17 and P51’s were a classic WWII shoot that was spectacular. Sunday was a mismatch of different aircraft, totally in 5 different planes that we got to photograph. It started out with this one, the A36 Bonanza which is one of the best shooting platforms for aviation work and amusingly enough belonged to one of the participants. The pilot for the craft was Casey, same guy that flew Cripes’a’Mighty the P51 the day before. Mom was also in the Bonanza photographing us in the sky van. It was crossfire shooting!

Each plane in separate waves except for the last two which i’l be talking about tomorrow. Next up after the A36 was the RV8, kind of a sporty looking plane but with classic fighter paint job. It didn’t even realize that there were two people in the plane until i looked at the images on the computer. Can’t believe they were able to cram two people into that little thing. The big thing that i noticed throughout the entire shoot, both days, was the light. As we were making the left turn orbit the light constantly shifted lighting up different sides of the aircraft. Everything from back lit, to front lit, to side light, both sides, were happening. The pilots afterward said the best time for the photographers was the worst time for them; staring right into the sun.

The RV8’s are good examples of this fact. The one top one is back lit and the bottom one is top coming out of being front lit. I like both shots it shows what the pilots had to go through and it just creates more variety. At times i would switch exposure comp to try and help a little but it got the point where it was hard to keep up and i was ultimately missing shots.

The third guy up was the Steerman, also known as the Red Baron. There were two Steerman’s in the hangers at CAF a yellow one and the Baron. Out of the two i have to say that the Baron was much more appealing. The red just glimmered.

The Red Baron is definitely one of my favorites form the shoot, from the angles, to the way the light shinned on it, to the background that popped out so well with the plane. It all just came together. Now as i said earlier there are two more planes that we photographed in that shoot, but you’ll have to wait till tomorrow to find out who they are.