A lot of people have asked me over the years if I have spent much time photographing jets and I always say, “I’ll shoot anything that flies.” I have only done one air to air with a jet aircraft the rest have been prop planes but that’s partly due to what’s available to me and what I’ve gone after. Over the years one plane that I have spent some time photographing and rather do enjoy is the A-4 Skyhawk. It’s not a real common aircraft anymore with less then 3,000 every built, but is one of the most preserved aircraft out there because it used by Air Forces all over the world. In fact some A-4’s still remain in service in other countries.

The A-4 is a single seat jet, delta wing, jet aircraft that was capable of carrier operations as an attack fighter. It was built between 1954 and 1979 by Douglas and later McDonnell Douglas. It was originally designed with the Wright J65 turbojet engine; but from the A-4E onwards, the Pratt & Whitney J52 was used. The A-4 played a key role in Vietnam War, Yom Kippur War and Falkland War. With it’s five hard points that A-4 could carry an array of different bombs and missiles. It was even capable of carrying and dropping a nuclear bomb. The high nose landing gear was designed specifically for this purpose. 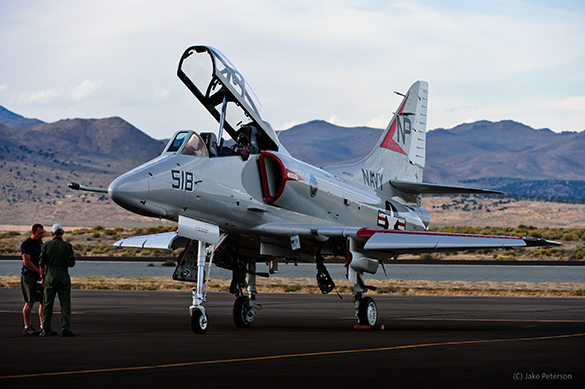 The A-4 was developed by Douglas Aircraft’s Ed Heinemann after a call went out from the US Navy for a lighter, faster fighter plane to replace the AD Skyraider. Keeping with post WWII designs the A-4 was a simplistic plane with shorter wings, allowing for more planes to be stored on bored the carrier without the need of folding the wings and a weight ratio that was half of the Skyraider. The A-4 was given multiple names by the pilots that flew the nimble little fighter but one stuck out over the rest, “Heinemann’s Hot Rod.” The A-4 was designed to carry multiple armament loads combined with the 2 20mm Colt Mk 12 Cannons, one in each wing root. The Delta Wing design allowed for more fuel capacity, short overall wing span and no increased support for folding wings. The A-4 was also one of the first planes used for air to air refueling with a center tank under the fuselage and a retractable hose for the other plane. The refueling plane would takeoff first then the fighters. Once the fighter was low enough it would fly behind the refueling A-4 and being to refuel via the hose. This method would later be replaced by other aircraft including the KA-3 Skywarrior. 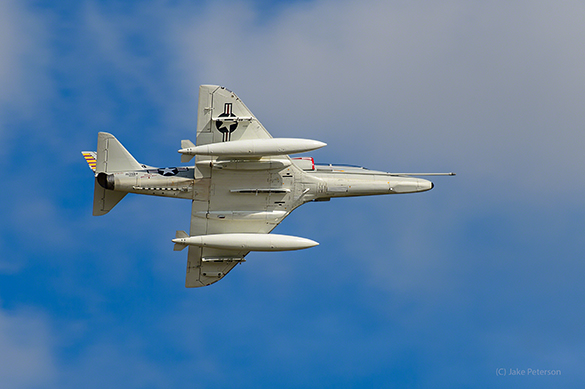 Due to the small size of the A-4, it became a popular export for post WWII Navies. Many of the older carriers could still operate the small plane and because of it’s versatility and ease of maintenance it remained in service for a number of Air Forces for several decades. In the United States Navy the A-4 remained as a training aircraft until the 1990’s but was removed as a frontline fighter in 1967. The Marines however kept the smaller more nimble plane until the mid 1980’s when it was replaced with the AV-8 Harrier. The A-4 did serve as a trainer aircraft for the NAvy for decades including the role as a substitute for the Mikoyan-Gurevich MiG-17 at ” Top Gun.” At one point the A-4’s were even the primary aircraft used for the Blue Angels, when the F4 Phantoms were replaced and they continued that role until the F18 Hornets became available. 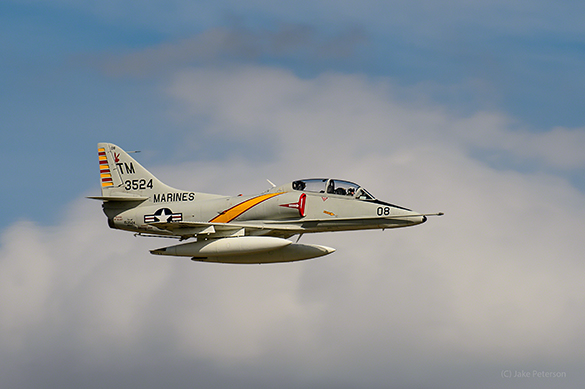 Today the A-4 can be seen at various airshows throughout the country including the Reno Air Races, EAA Airventure Oshkosh, Wings Over Houston and others. While there is no guarantee that any will show up at the same event year after year, it is a good practice to keep an eye for the appearances that it does make. They are certainly worth seeing. 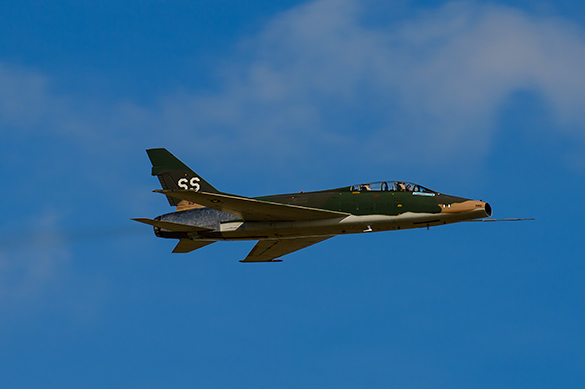 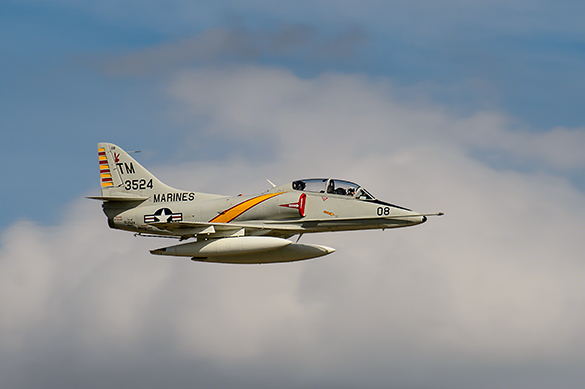