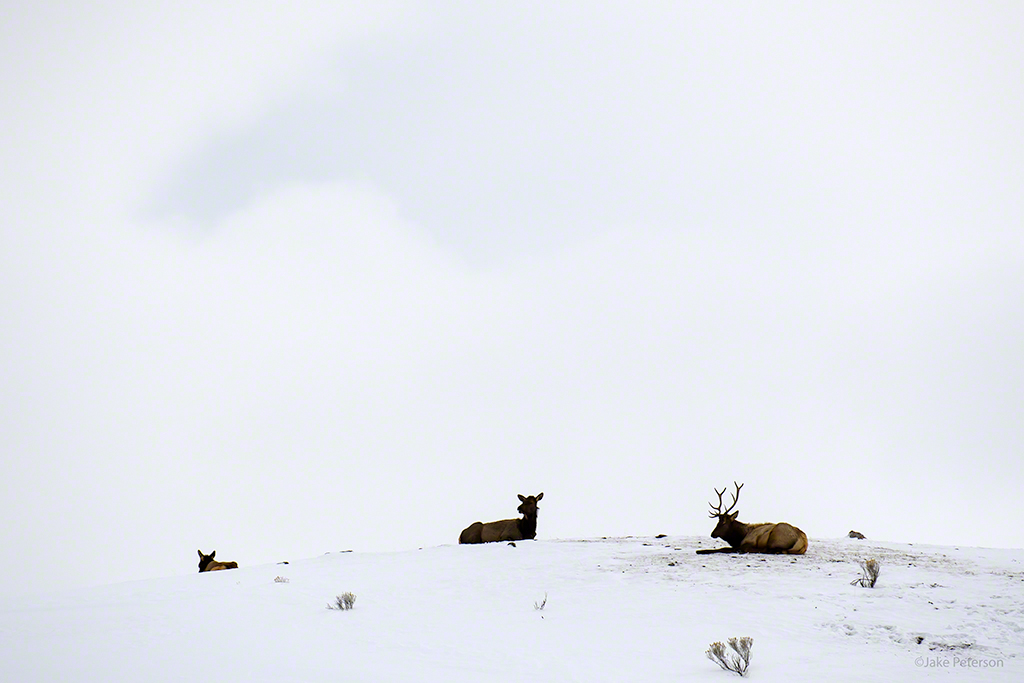 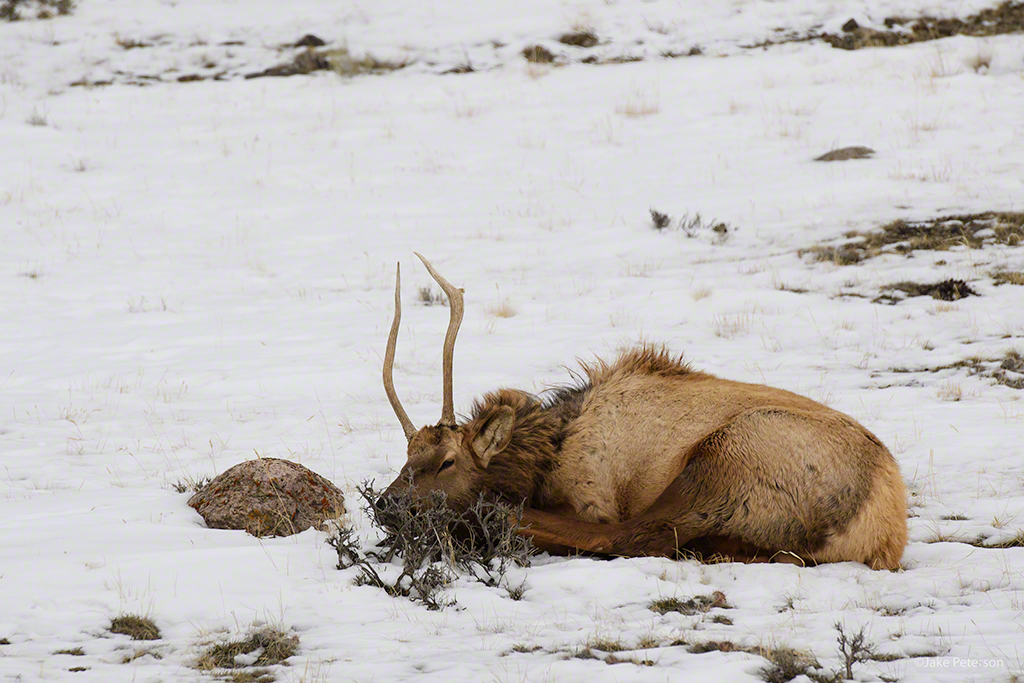 The world doesn’t come to an end during winter in the Rocky Mountains. One would think that with the amount of snowfall we get and the harsh temperatures that life just stops, but no it goes on. The trick to surviving in winter is maintaining energy. Maximum caloric intake with the least amount of output. That’s the balance. On warm sunny days, you often can find various ungulate species lounging in the sunshine while employing this technique. This young Bull Elk spent the morning grazing and by the time the afternoon hit he was out for the count, except for the occasional glance at his harem. Priorities after all. 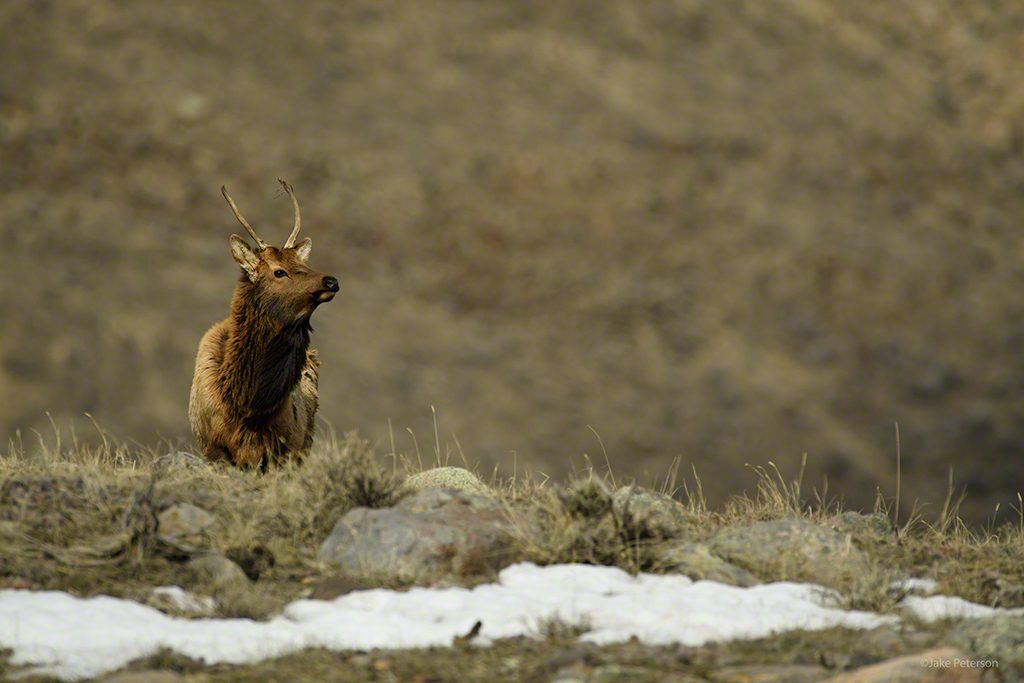 Every year in the Fall many ungulates going into what is known as the Rut. Males will compete with other males in order to attract females so they can breed. The males will bugle, be aggressive, and lock their antlers with other males to prove their dominance. While typically the rut goes between mid-September and mid-October, each year varies a little bit. This youngster still has a ways to go to be strong enough to win any major victories but he’s on his way.

It’s getting close to that time of the year when all the big game get their full luscious fur coats back. With the drop in temperatures that surely are coming next month, big game like Bighorn Sheep, Elk, Deer and Bison, will are start looking bigger and more romantic thanks to that winter coat. For photographers it’s one of the best parts about fall and winter. When it comes to photographing them be sure to really watch your depth of field, too much depth all that fur can really start to look over sharpened. I tend to shoot mostly with the 200-400 VR but it never hurts to have the 600 f4 ready to go. 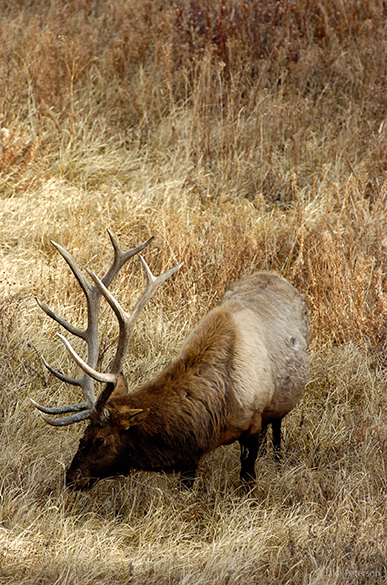 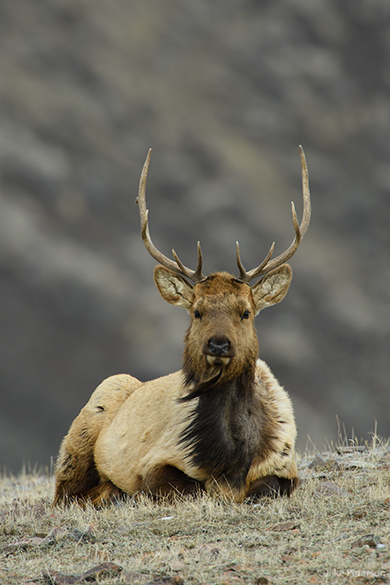 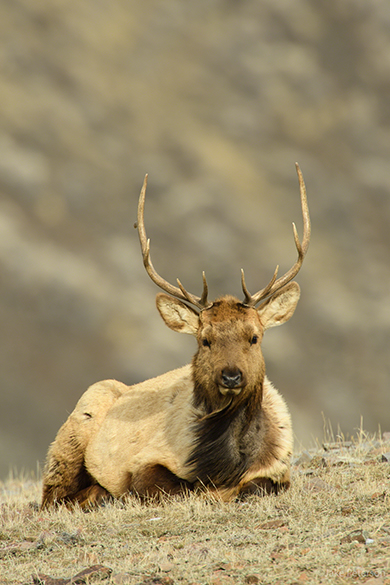 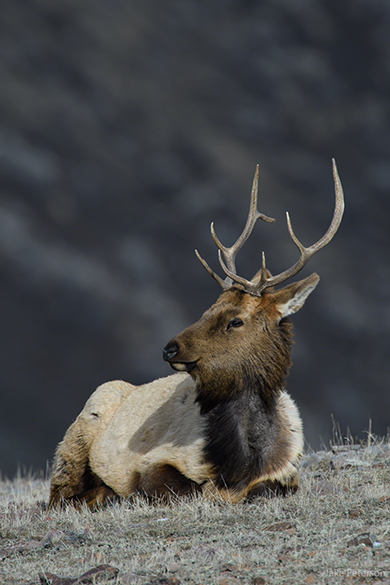 When it comes to wildlife, the background and foreground are very important elements that not only tell the story of where that critter lives but can also be very distracting. A good wildlife image plays on your emotions and gets you enjoying that subject. Distracting elements can easily bring a viewer out of that moment. That’s why using a narrower plain of focus not only makes for more interesting images but is a simple way to clean up busy foregrounds and backgrounds. 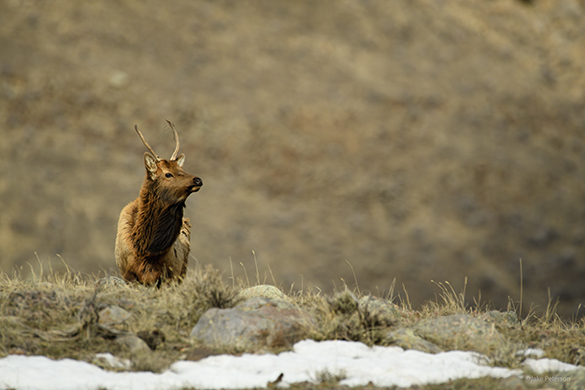 Now one of the most common examples you see today of this involves shore birds. A lot of great photographs have been put out there of shorebirds where the photographer got down low to change the plain of focus. This technique works just as well with large mammals but often times is easiest to accomplish if the subject is up on a hill and you’re beneath the hill. This was taken with the D5 and 600 f/4. I was watching this small bull Elk come up the hill to where the cows were. Watching it’s behavior it was easy to place myself where I thought he would pop up and sure enough did. He was keeping his eye on his herd and on me. Knowing this behavior, watching the light and the plain of focus, is how you get great wildlife images.

You know you’re not disturbing the the subject if it falls asleep. This may seem a little counter intuitive but if you’re working with wildlife and your subject falls asleep then that means that it feels safe. Critters are constantly on the alert for predators and a person gives off that same feeling of distrust to a critter as a predator would. It’s an unknown species in their habitat which can make them uncomfortable. So if they fall asleep then that means they don’t care about you. 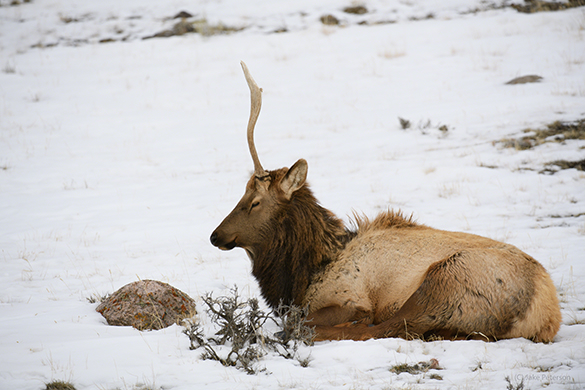 Right now is a great time to be working with large mammals. Elk, Deer, Bison, Bighorn Sheep, they all have their winter coats on so they look bigger and more vibrant. They also all tend to forage around the paths of least resistance. Calories in versus calories out. One my favorite spots to go is Paradise Valley because the corridor acts a protective valley with lots of vegetation. Two important things to keep in mind when working out of vehicle, which is one of the best methods since it acts as blind, are be sure to pull all the way over and have the camera ready. Basic safety is essential for both you and the subject. Don’t stop unless you know that it is safe too. Secondly, if you’re traveling in an area where you think there will be good photo opps then be sure to have the camera ready. I had the D5 and 200-400 VR on my lap in case I ran into anything and in this case it was a herd of about 50 Elk with this juvenile male being the subject.

It’s my favorite time of the year again when the first snow falls and the days are getting shorter. Sure the summer months are nice with the warm long days but for me, I grew up like a ski bum and having snow again is paradise. The shorter days means that sunrise is later, which is great because I’m not much of a morning person but I do love sunrise photography. Best of all the big mammals across the continent are getting ready for winter which means they are shedding their summer coats and getting those nice big fluffy winter ones on. It’s a great time to be outdoors exploring the world. 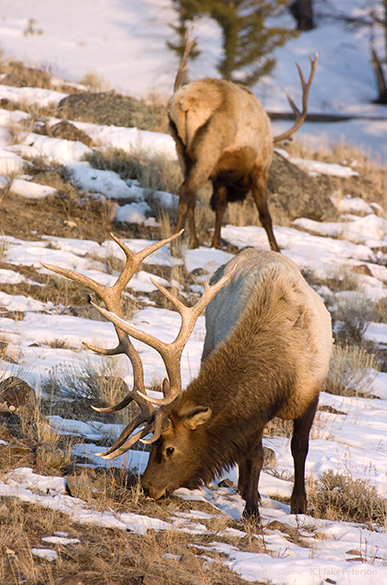 This was taken a few years back in Yellowstone. It was the last light on a late fall day. This two beautiful Bull Elk were grazing along this tiny strip of exposed land. They made great subjects in the evening light. Shot with the D3 and 200-400 VR.

The last lesson for the week is quite a simple one in context but can be the most difficult in the long run, in part because not everyone lives in an area where these guys live. The last lesson is to go out and find the big game. The big critters Elk, Deer, Bison, and Bighorn Sheep are some of the best photographic subjects you can find in North America. However this is one of those location dependent cases. Well all Mammals look better in the Fall. The Fall is when they start to get their big fluffy winter coats and they honestly just look their best. If you have ever seen a Bison or Mule deer with a bad shed going on then you know what I’m talking about. 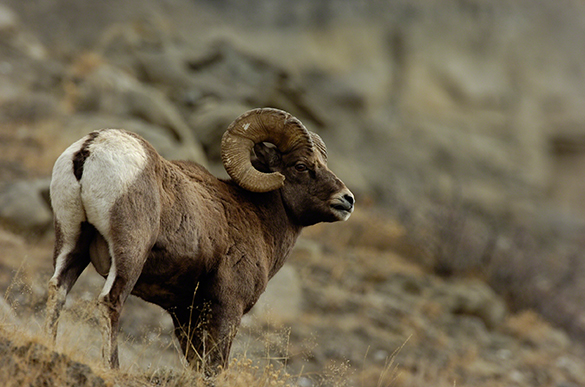 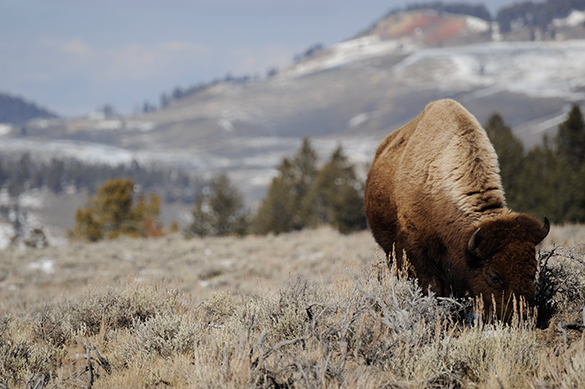 Half of a Mammals look or bodily shape is dependent on that fur coat. It provides color, depth and texture to that creature. Thus it creates all those elements in the photograph. Not to mention it also provides warmth for that critter. Fall also brings with it the rutting time for males. While each one has it’s own technique they generally can be quite exciting to watch. One of my favorite creatures to watch this time of year is the Bighorn Sheep. Not only are they interesting critters but their rut includes literally butting heads together. The sound of two big males slamming their horns into one another can be as loud as a gunshot but impressively neither one is affected by the force of the other. It’s truly amazing to biology. 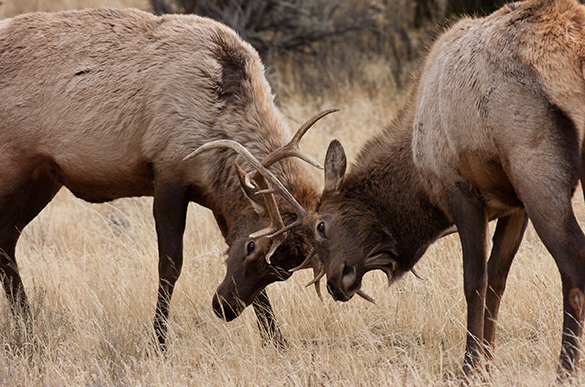 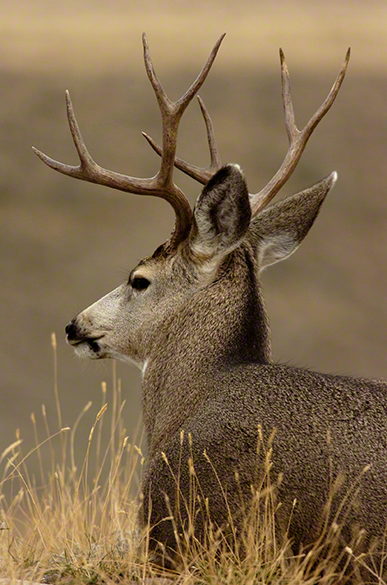 So why did I post this lesson considering not everyone has big game in their backyard? Well it’s quite simple, not everyone has big game where they live but odds are everyone has some species near them, which means that there is a possibility to get shots of something that you ordinarily might not be able to. Keep in mind it’s Fall, migratory species are on the move. This comes with the changing of the weather and can be a lot of fun. There is one very basic and important rule when it comes to Wildlife photography, no photograph is worth sacrificing the welfare of that critter or the home in which it lives in.

Sorta is really a good way to describe what I’ve been up to lately. It seems like there is a lot of unfinished projects going on and the list isn’t really getting smaller. Well this is one of those projects that I kind of dreaded doing because it takes so long to get done. But it was time to do a thorough update of all my Galleries. Some are still in the the works but Birds and Mammals are done! For now at least. I have more than doubled the previous amount of images in each gallery! As my files grow so will the galleries, hopefully. In the meantime I enjoy some of the new images and some of the old favorites. 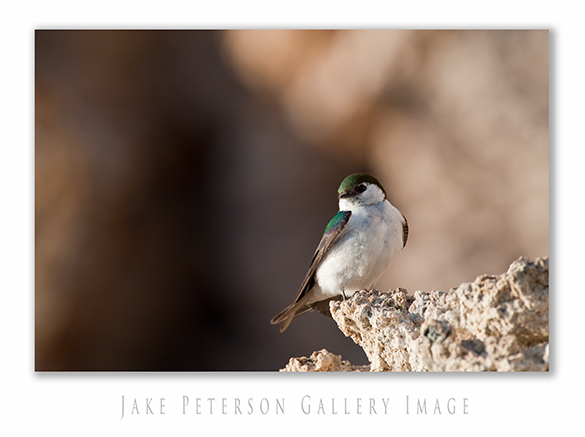 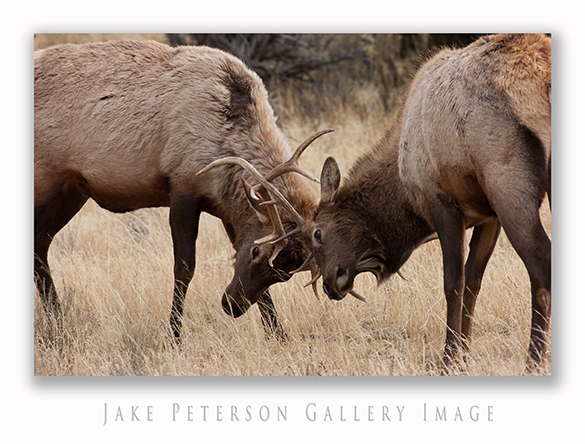