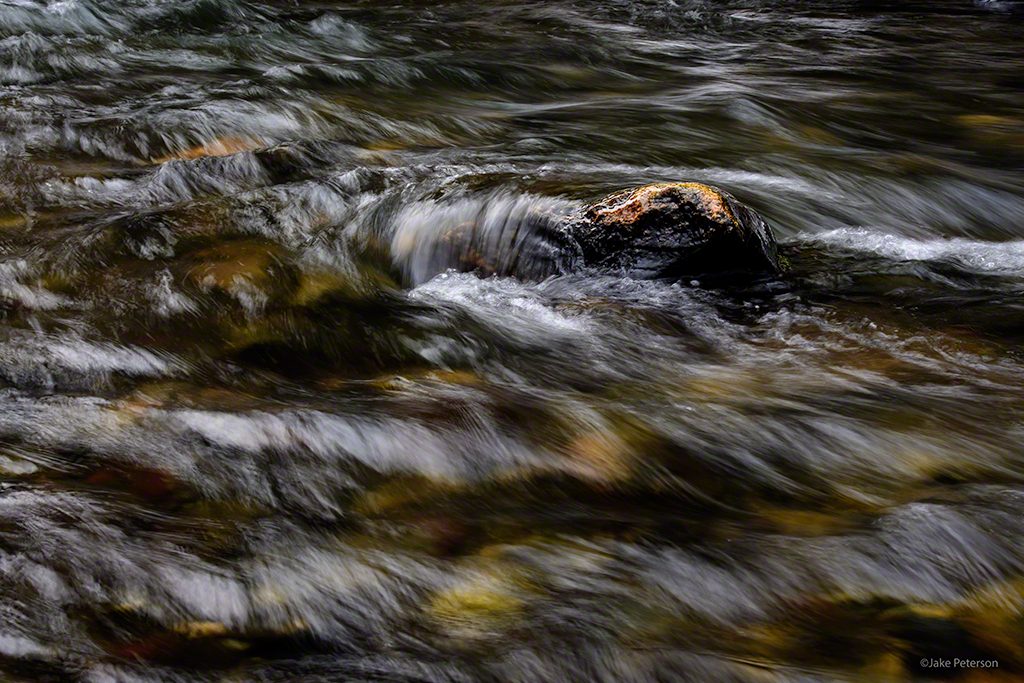 I spend a lot of time on the river, mostly with a flyrod, looking at the water and trying to find that right spot. You see shots like these everywhere of really blurry water with an anchor somewhere to fix your eye on. That’s fine, every photographer should have one of those photos in their library. Just make it a good one. Look hard for that spot that has a good current, the right color, some character, a good anchor that is bright, vibrant and catches your eye. Really try and find that awesome blurry water shot. It takes time to find it but that’s why we become photographers, for the journey. 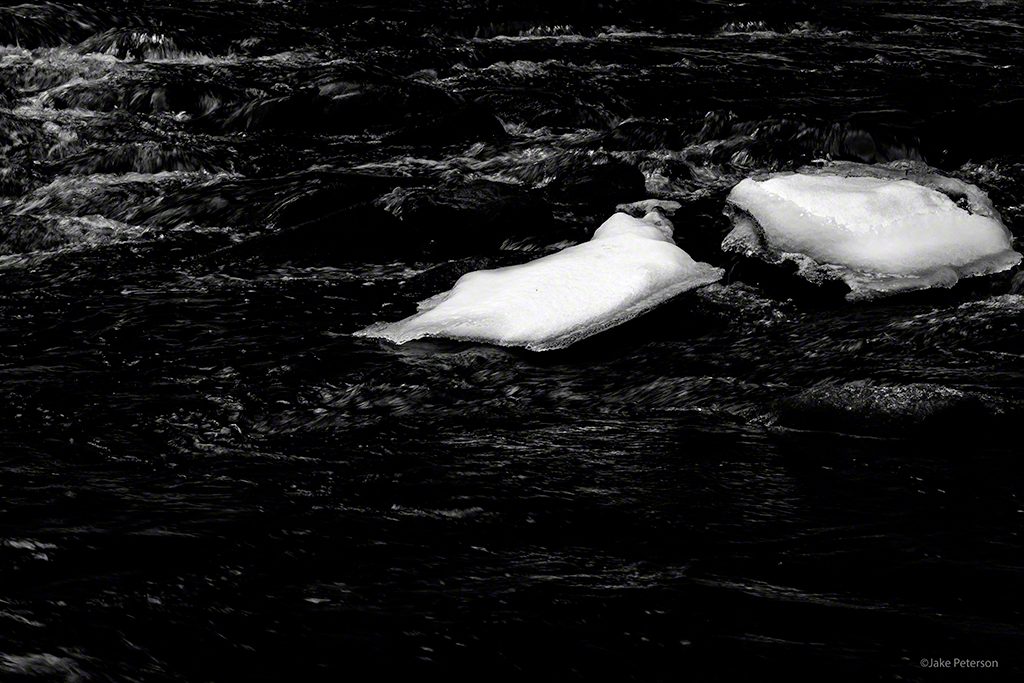 December is often associated with winter, snow and of course Christmas. The one thing I’ve learned out of all my years living here in Montana is that winter can never be predicted. Even the weathermen a day beforehand can’t figure out what it’s going to do. So how as a photographer do you deal with that? 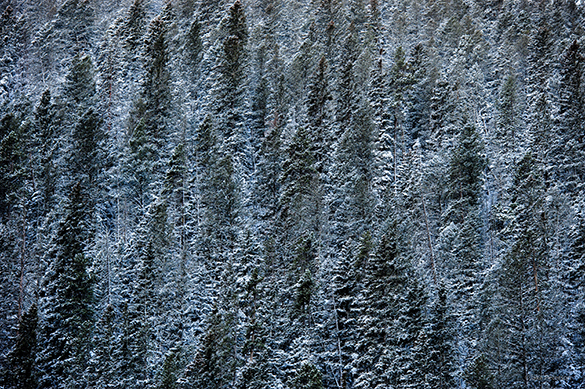 Lots of exploration. It really sucks when you’re out shooting in need of a good photograph and you just can’t find it. The days where you get skunked are all too real and can be very frustrating because you know what it should be but it’s not there. The answer is to be patient and to keep driving around until you find something. If you keep a journal of great places to shoot, which I encourage every photographer to do, then that can help with those lulls. Otherwise just keep your eyes open and see what comes your way.

Winter storms can really suck the motivation away from going out with the camera. It’s cold, it’s dark, it’s snowing and you’re left with this challenge of making something happen with all that. Well despite that, they can break up and when they do that fresh coat of snow can be gorgeous. Well up at Hyalite Reservoir a really strong storm came through that basically was white conditions. After 20 minutes it was gone and all that was left was fresh snow and some great pocket lighting. 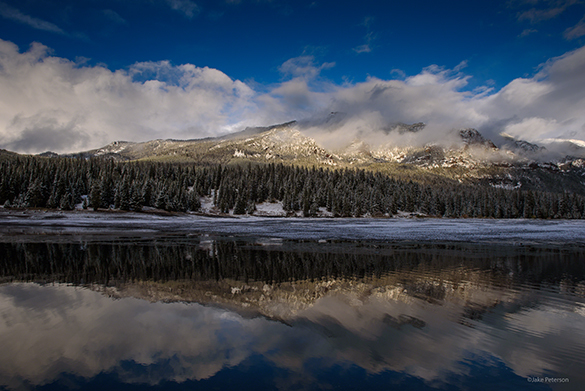 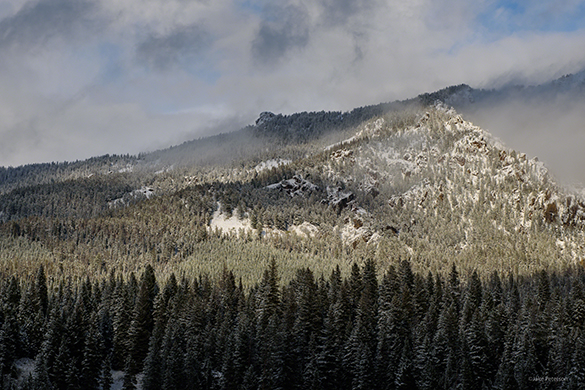 It’s hard to believe the blue sky came out but it was never more welcome. In these type of scenarios I love using a longer lens, mainly the 70-200 VRII because it allows you to isolate certain areas that are more interesting while eliminating more distracting spots. Since I wasn’t expecting this to happen and I had a more stripped down setup I made do with the 24-70 AF-S and High Speed Crop. When these situations come up you have to adapt quickly or miss out. 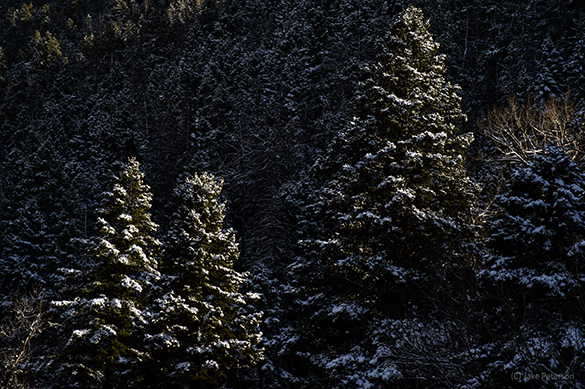 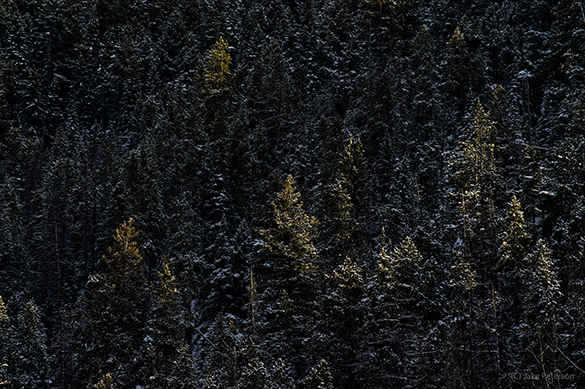 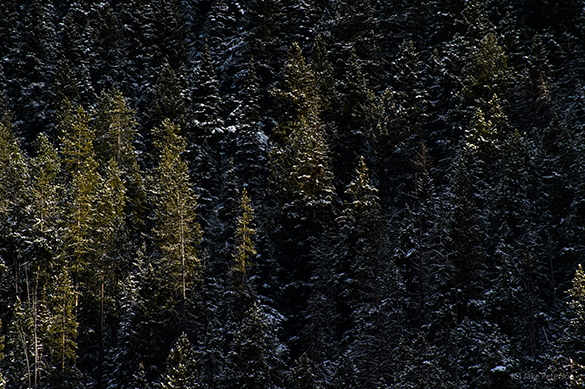 I’ve only had the 18-35mm f3.5 for a couple of weeks now but I got to say I really like that lens! It’s just a great light weight lens. It’s wicked sharp and the 18 to 35 range is great for landscapes. It’s also great for working inside of planes or other small spaces, as I tested that out last weekend at the LA County Airshow. But one thing that I wanted to make sure I did this year was try the 18-35 with snow. 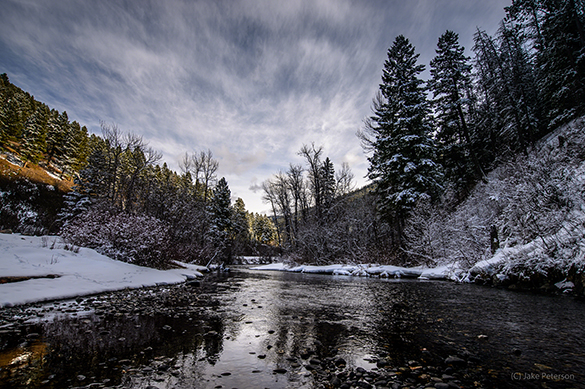 On Monday I went up to Hyalite Canyon after the snow stopped to work with the fresh powder. I love fresh powder. There is something about fresh snow that it’s just crisper or brighter. Whatever it is, there is a visual difference when compared to snow that has been on the ground for a couple of days. Well this one spot just happened to be rather low in the river so it seemed like the right spot to bring out the 18-35. Real simple one click image that was finished in Adobe Camera Raw.

Over the last couple of weeks the temperature has really gotten warm, resulting in a lot of snow runoff. It’s great in some ways but not others. Yesterday we had a little storm come through adding a few inches of fresh powder, which was great for the skiers, and of course yielded a couple of nice images. This was just a quick click at sunset with a little bit of light hitting the top of the peaks up in Hyalite Canyon. 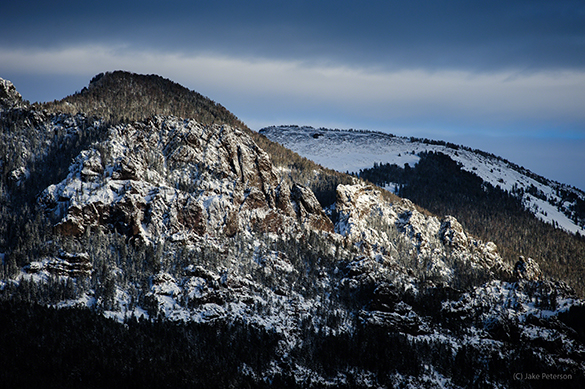 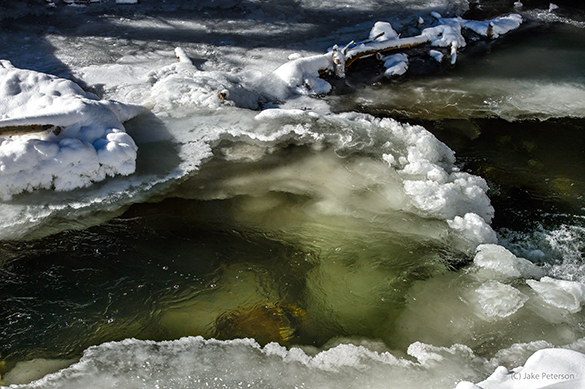 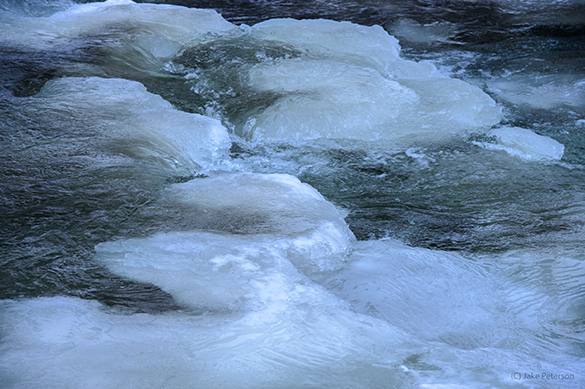 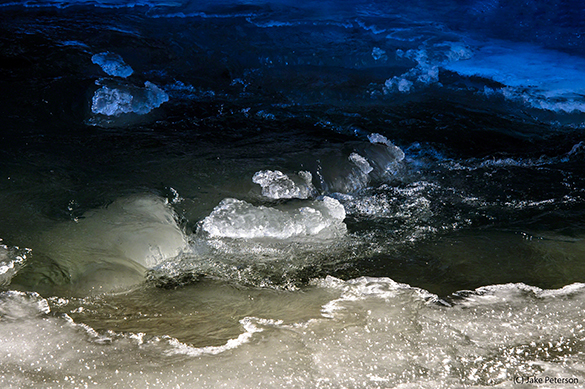 When it comes to winter landscapes I love working with ice. Ice can be a lot of fun and one spot can suck up hours of time. As we all know from the ice cubes in our freezer that ice is usually cold and see through. While it changes often based upon what is behind it or what the ice is frozen too, the general thought when it comes to ice is that it’s cold to the touch and when capturing the essence of ice that is something to remember. 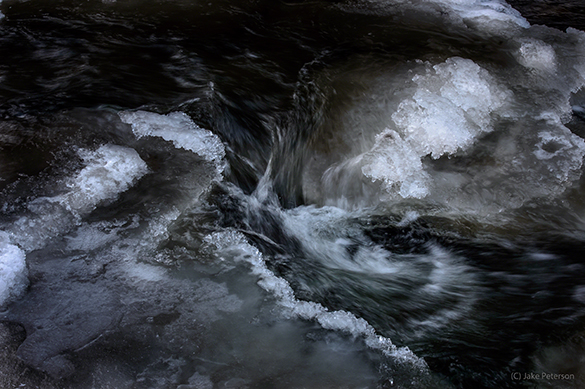 This happens to be a great time of the year because we don’t have the snow levels yet to cover up all of the ice that occurs when the rovers freeze. There is enough motion in the water to break free from the ice and thus create pockets of moving water combined with icebergs. One of my favorite places to spend a morning is up in Hyalite Canyon where there are lots of these pockets and the light keeps changing thanks to the natural landscape of the canyon. 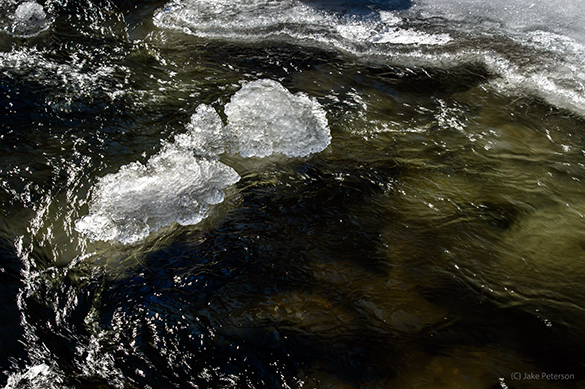 Now everything I shot here is with the D4 and 70-200 VRII. Why that combo? Well, as it is with most canyons the darkest spot is on the bottom and the brightest is up top. To try and encompass everything would result in a lot of HDR images that wouldn’t accomplish what I wanted. The story wasn’t about everything it was merely about the ice and how it is constantly different. The 70-200 is a great lens for isolating those details in the ice. 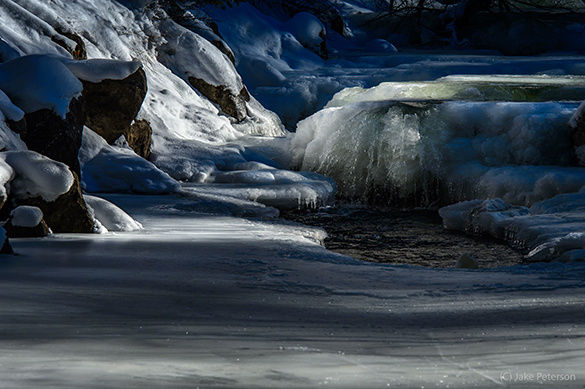 This is a great example as everything around this one spot was surrounded in shrubs and brush that just wasn’t appealing. The focus was this one little waterfall, the last unfrozen patch in this section of river. What makes a great winter landscape image is he same as any other image, the light. Where the light hits, how much light and what is lost in the absence of light.

Winter is truly my favorite time of the year and not just because I’m a ski bum. While some days it can be photographically challenge to shoot, prompting one stay inside where it’s nice and toasty warm, the days ventured out can be truly rewarding. Snow is a natural powerful element that can be used in a variety of ways. While on the surface it’s just white, the ice crystals change dramatically with just a little bit of light. Snow can turn any boring or dreary landscape into a vibrant canvas when explored. 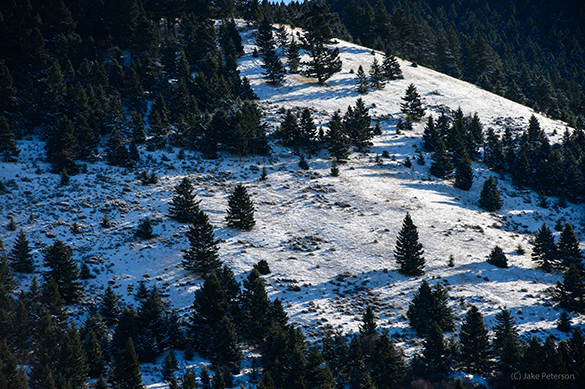 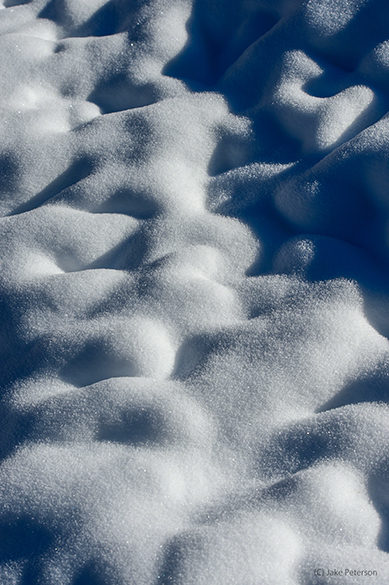 Snow has a general appearance of being soft and light, like a blanket stretched across the earth. Everything underneath pushes up trying to gain reach over the frozen ground while the gentle light shows the beauty and truth of its being. It’s the combination of the elements that can make great images. 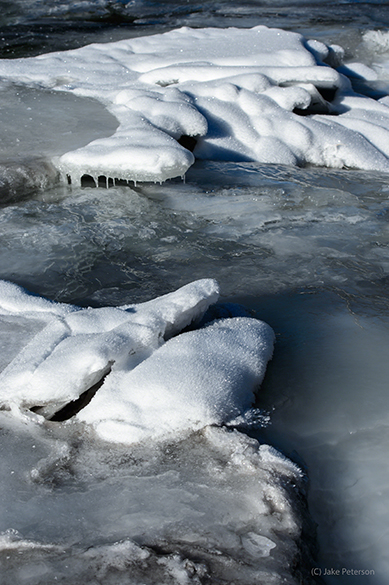 From the frozen lakes, ponds, rivers and streams, every chunk of ice can be used to tell a visual story because every time the water freezes, it’s different then it has ever been before. 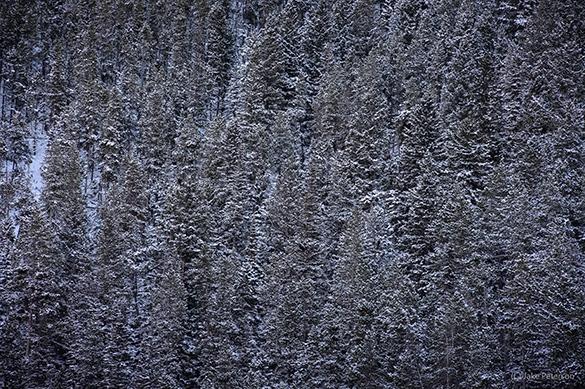 Even the frozen trees sill covered in a week old snow show the signs of bearing the weight of the cold. Even in the absence of light the pattern of the land comes to life.