One of the great things about shooting landscapes is knowing that behind you could be the better image. While I was out this past weekend at the marsh, which happened to be next to the Gallatin River, I stopped on a bridge and shot a little bit while the sun was just about down. Now the way the clouds were that evening, the great reds were never going to appear where I was up but further out west. That didn’t mean thought that there still wasn’t light. Even without the direct light there was enough definition in the clouds to bring out some of the contrast in the light and dark areas. What fascinates me is the difference between looking east and looking west. 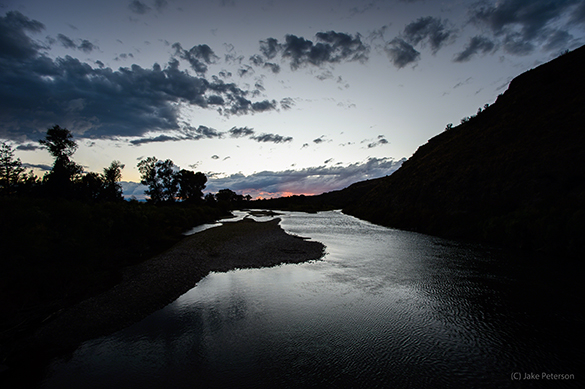 The great thing about working with bodeis of water is that they reflect light and that reflection can be almost graphic in nature. While looking out west where there was just a slight hint of red on the horizon, the rest of the sky showed almost no coloration. While the scenario is technically backlit the overall tone is that of a black and white. This is a result of no clouds, no moisture, the temperature seems more neutral then cold as a result. 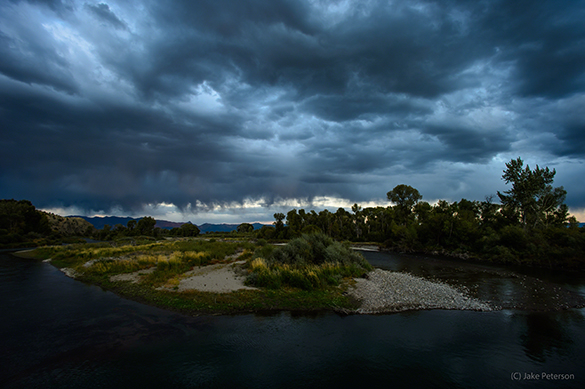 Looking out east where the last bit of light was hitting the clouds are cold but there is enough light to make out the rest of the scene. Both images were shot with the D4 and 18mm and neither one of them saw much time in ACR but it amazes me how different the landscape can look when looking 180 degrees the other way. The physics of light in that regard are pretty amazing.

I love working with roads. It may seem odd to use in landscapes but they are a great simple way for the minds eye to move through an image. When it comes to my landscape photography I try to either exclude the man made objects that are often distracting from the overall scene or incorporate them so that they are not distracting. Roads are one of those man made objects that can be included to tell a story. 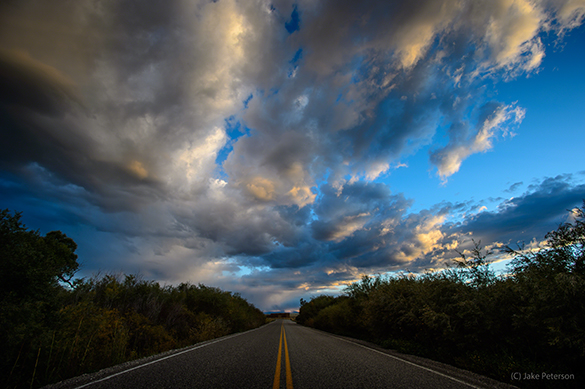 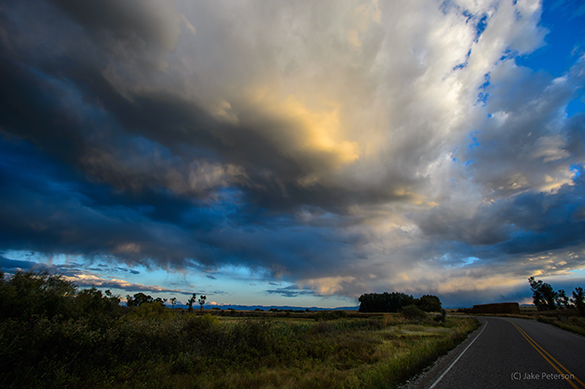 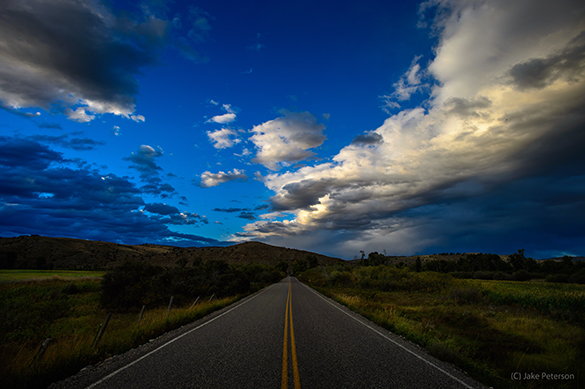 I threw up these three examples to show how effective a road can be. They were all taken with the same settings and with a D4 and 18mm. While they were all taken at the same location they were in slightly different spots but the story remains the same. The really important element to remember when it comes to roads is that there has to be something worthwhile at the end. That simple notion goes back far into human psychology that there is always something better at the end of the journey. The image incorporates that ideal by showing what we are seeing along that journey. The next time you’re out shooting remember to look for those roads.

Montana has been very fortunate this year in the low amount of fires we’ve had in the Gallatin area, especially with how dry everything has been. Over the last week the smoke has slowly cleared out of the valley in part due to the number of storms that have come through. This past weekend we had a great storm come through and Saturday was a great evening to head out. 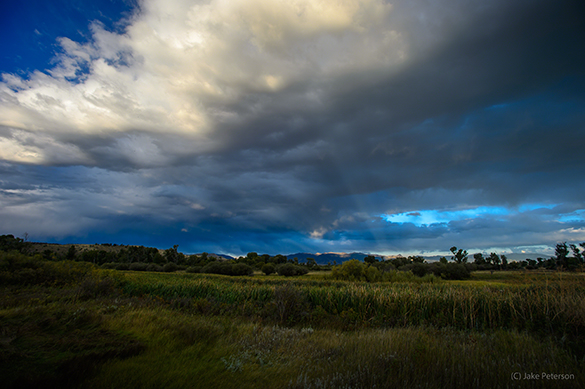 With the potential of some great light I headed over to a local marsh outside of Manhattan where the birding has been good in the past. When it comes to chasing storms knowing where the best light will be hitting is essential in order to get the best shot. Often times knowing this comes from a lot of time spent exploring the local areas so that when one of those mornings or evenings comes up you’ll now where to go. While it was somewhat of a gamble going to the marsh, having been out there before I knew that it would be good one way or another. Well for birding it wasn’t as good but the sky did open up right above me. 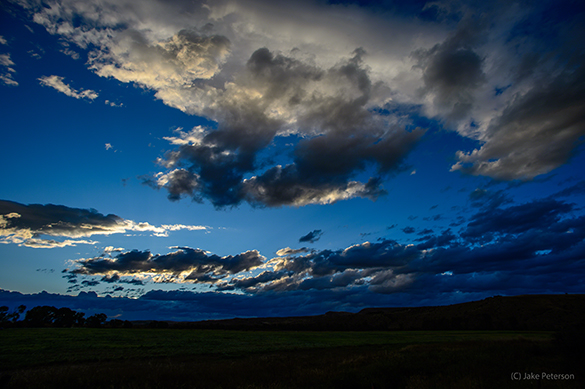 This is one of those times when it’s all about having fun. With the D4 and 18mm all I did was point and click. Being able to shoot and just enjoy is rare treat in the photography realm and is easy to forget about after all the time spent planning out schedules. The sky was great for a while but in the bottom image looking out west, the clouds were rolling in fast stopping that last breath of light from emerging. Still was a great evening to be out.

I love Spring weather in the Rockies. Bozeman has always been a great place for landscape photography since we usually get some great clouds moving through. Yesterday was one of those days where I really wasn’t sure if anything was going to happen since nothing did all day. It wasn’t until about 5pm that the thunder started. One quick 90 min rain shower later and it was done but the clouds stuck around for a little while to play with. 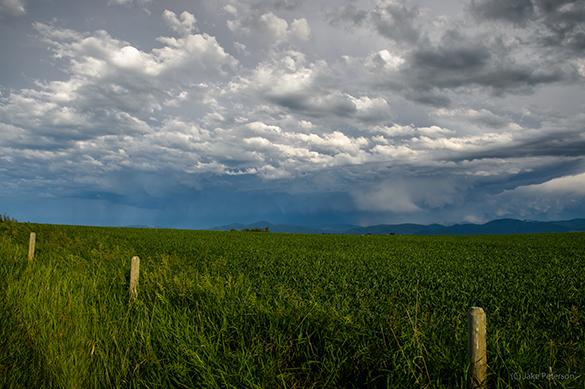 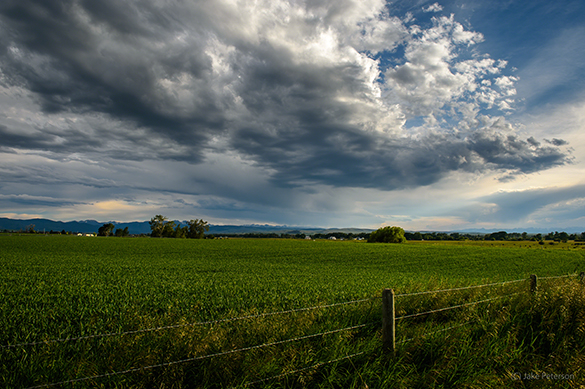 I drove over to my buddies ranch which is one of my favorite places to go for the Spring weather because I can get a 360 degree clean view of the Gallatin Valley, while able to see the mountains in all directions. It’s good to have friends. These were just a couple of quick clicks with the D4 and 24-70, focusing on the great green fields and contrast in the clouds.

Except for my travels, I have spent my whole life in the mountains. Whether it’s the Sierra’s or the Rockies there is just something about being up in gods country that just feels good, especially when those days come along that I’m glad I became a photographer. 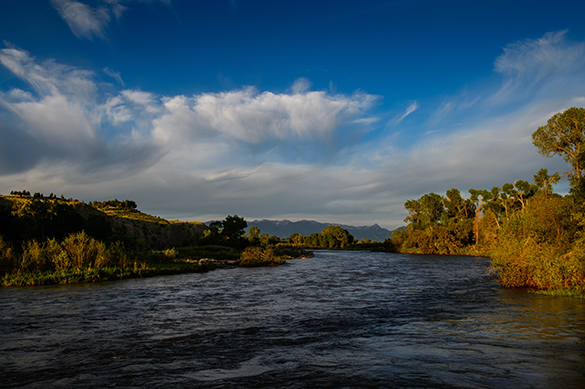 The Gallatin River is very swollen right now with high waters at most access spots and is anything but clear. This is usually the case with the Spring runoff and it makes it not enjoyable for fishing but still useful for shooting. A while back I had found a spot that looked promising for birding and it happened to be next to the river. The light was fading fast but there was enough on the river with the right clouds in the background to warrant a quick click with the D4 and 24-70 AF-S. 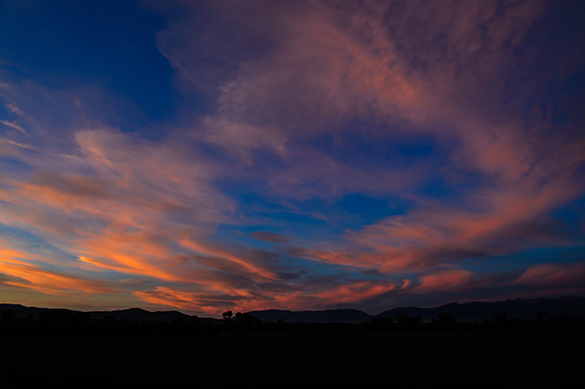 I never would have guessed that with the small diffusion layer to the west that the sky would turn from what it was to what it became. I truly haven’t seen a sunset that spanned the length of the Bridger’s and lasted for forty five minutes, that’s 30 minutes after sun down, in a long time. It was one of those moments where I was kicking myself wishing that I was at a better spot but life being what it is you can only make do and enjoy the show.