Well it’s starting to feel like winter already which is kind of amazing considering how short fall was. With this last big storm that swept across Montana, a blanket of snow was dropped and it was a pretty good size blanket. We got a good foot here in the valley which is actually typical for November as we always seem to get at least one big storm before Thanksgiving. 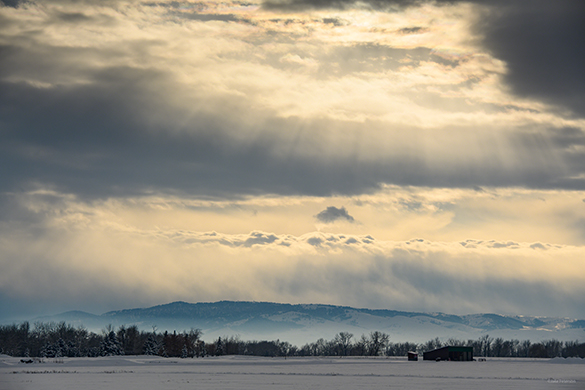 When big storms come through I watch the weather carefully never knowing when the whole will come in the clouds letting in just enough light to really make that fresh powder shine. Sunday we had a few hours before the next storm cell would bring in more snow I went out looking at all that great powder. Sadly I returned with nothing. That’s how it goes sometimes. You get all ready to find that image only to return empty handed. Then looking out the window in a brief moment there was the image. This is why it’s important to have a camera on your desk for you never know when it’s going to be needed. This was a simple click with the D5 and 70-200 VRII out my window towards the neighbors horse ranch. A little bit of finishing in ACR and there ya go.

If you follow my blog then you’ve probably seen me post images of barns. I photograph barns a lot because they are great subjects to work with. Each one is a little bit more unique and each one has it’s own story. The best part is as soon as you find one the hard part of finding a subject for a landscape image is done. Well this particular barn I’ve known about for years but I’ve never gotten a shot of it that I have liked. Until now. 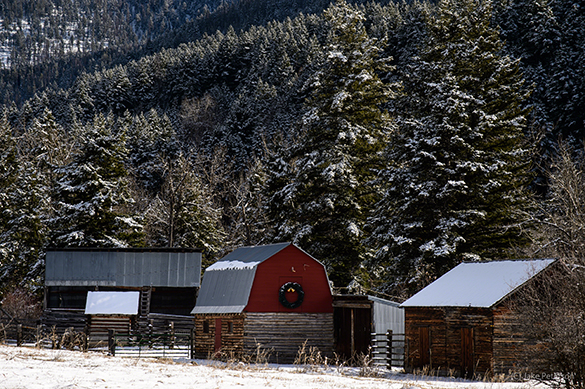 This is actually a well known barn as it sits right by the entrance to Hyalite Canyon. A lot of people go by it everyday making it a very popular barn. In fact I’d be willing to bet that just about every photo student that went through MSU has stopped and thought about this barn at some point. While it’s easy to get to it’s not easy to photograph and believe me I’ve tried! Due to the angle and proximity to the road it’s a challenge. We just had a nice storm come through dropping off a couple of inches of fresh powder in the valley. The clouds opened up in the afternoon so I went out for a little bit. These are the days I enjoy the most. Just going out shooting with no real agenda and what do you know this barn finally looked good. All the elements finally came together for me to actually stop and want to capture an image. In the past there was always an issue, whether the light, the angle, the background, cars going by, something. Not this time. With the D4 and 70-300 VR, it was just right. This really has to be one of those being patient and constantly trying images because it really has been years of waiting for that right moment. The funny part is as I am writing this I’m already thinking about how this could be better and having to wait for the next opportunity.

I love photographing snow. Every patch of snow is different, because of every snow flake is actually different. The way the light bends and refracts off of the snow makes it so seductive that it can be challenging and rewarding. One of the best ways to make use of snow patches is to convert the image into a black and white. 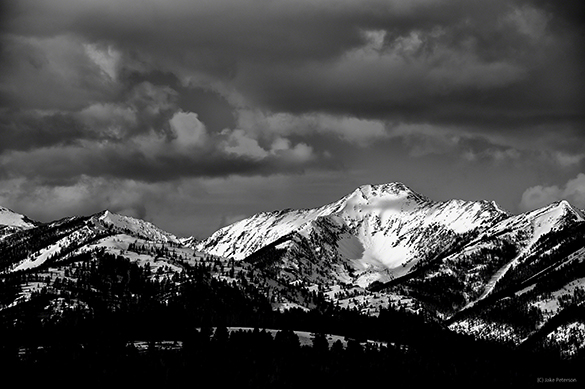 This is up in the Crazy Mountains on a rather boring overcast day. But the clouds added one nice benefit and that’s shadows on the landscape. It’s real easy to have a definite black and white point when it comes to snow but finding that other little element that makes it interesting like fog, or mist or a shadow will bring out more drama. Something to think about this weekend while out shooting, especially if you have snow in your yard.

I’ve always been an advocate for using man made roads or any other form of roadways when photographing landscapes. Like any other photograph there has to be a way for your eye to move through the image. While this can be done with many tools, using a road is certainly one of the most obvious. Sometimes the most compelling landscape images are nothing but a windy road, while other times it’s just a lead in. 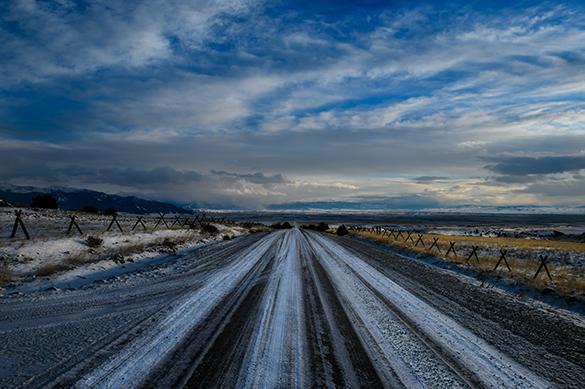 Roads are not just part of the story but they can lead the imagination some other place. What lays at the end? How far does the road go? What’s down the other end? Shooting with the D4 and 24-70 AF-S f/2.8, I tried to capture the beauty of a simple road leading down into the valley during sunset. With a little help in Adobe Camera Raw, highlighting certain areas along the pathway of the road, the eye has a place to go and a story unfolds. 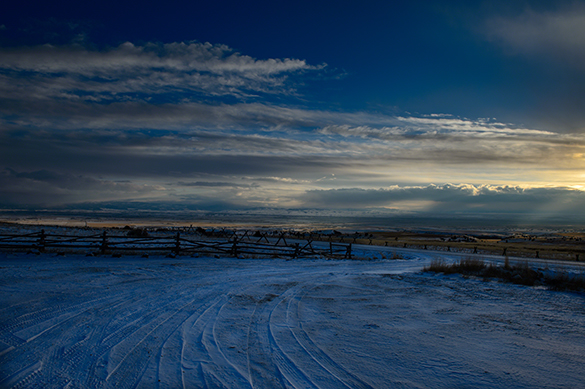 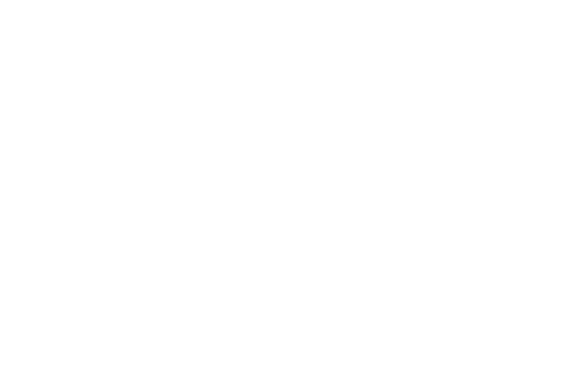 After spending time with the Geese I wasn’t sure where to go IF the skies would break up or not. That’s the joy of cruising. I ended up cruising along the Bridger Mountains heading north parallel to them, up to a point a knew about that would go into the forest. The light over the peaks was looking good as the sun kept going down. Then out of the north the clouds were moving so fast that this one big spear headed cloud decided to move in front. I’ve spent a lot of time watching sunsets and sunrises as they transpire into something great or fizzle into nothing. Even though the eye cup was so cold when pressed against my eye that it actually was hurting, I stayed and watched and shot knowing that this would be a great sunset. Shooting with the D4, 24-70 AF-S f/2.8 and Lexar UDMA Digital Film, the sky transformed from this. 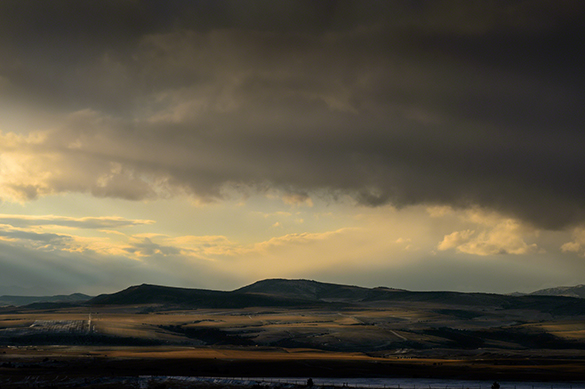 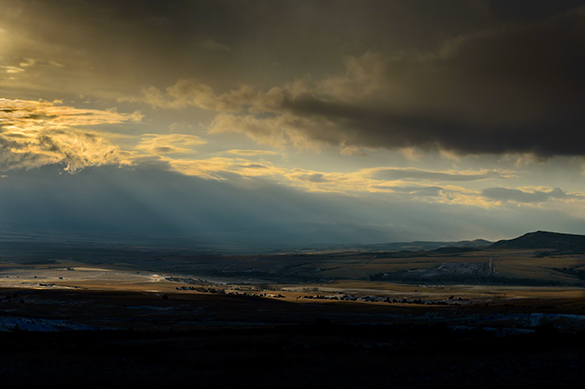 And finally, before the sun went down to just below the cloud line, to this. 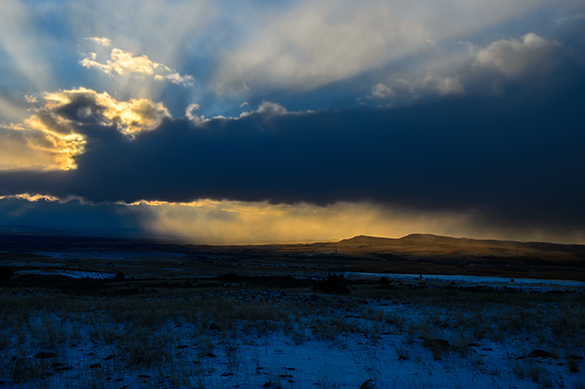 When it comes to powerful landscape images, god beams often make them. While I’ve shot many and seen many more, these were some of the boldest that I’ve witnessed. With a little help in Adobe Camera Raw by light painting a little bit of the foreground to bring out the light on the earth, the image becomes complete.