I always loved this shoot. It seems kind of fitting now that the snow has come back and started to white the Bridgers again. This was taken a couple winters ago over Lake Tahoe in the Sierra’s. Dad and I were flying in a HU-16 Albatross doing touch and goes on the lake. It was a ton of fun with the door off just looking over the side down into the beautiful Sierra Landscape. 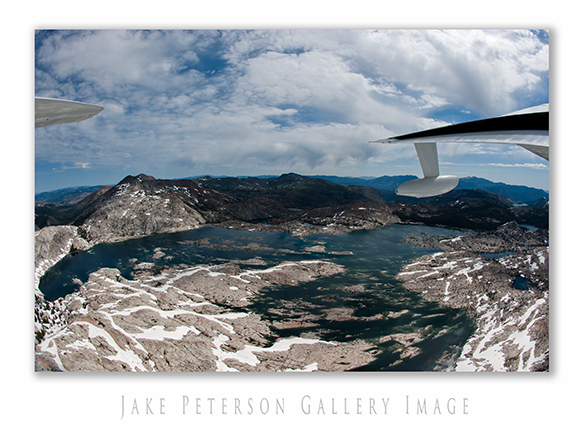 I normally don’t blog on the weekend but since I wasn’t able to blog this past week due to some technical issues, I thought it would be wise to have a couple simple post up for enjoyment. This was a quick shot taken a few years back of the Sierra’s from Owens Valley road.

With the Holidays on the way, faster this year then what I thought it would be, it’s seems harder and harder to get out at the moment. This past weekend was just tremendous fun with my friends but didn’t lead to too many photographic opportunities, even with the lunar eclipse Saturday Morning which I heard was great. Since i still wanted to bring something on this Monday to those sitting in an office chair, I thought that this image would be appropriate. This was taken last winter in the Sierra Nevada Mountains. Right now I’m wishing we had the same amount of snow up here.

Since the whole point of this past weekend was to get as much shooting in as possible, after Convict Lake we continued down the road towards some of the great granite peaks outside of Bishop. Now normally the first thing that comes to mind when the word granite is said in reference to the Sierra’s is either Yosemite or Alabama Hills. Well there are actual a number of great places just outside Bishop that are great shooting.

As you can see i kept with the black and white theme it just seemed fitting for that morning. We had a lovely storm come through starting this past Friday and as we headed further south it got better. As the clouds moved over the mountains little pockets opened up and light spilled over the granite. Nothing lights up like granite does.

All of these shots are just quick clicks of the mountains, nothing complicated. Post was even easier, a little ACR and Silver Efex Pro for the conversion to black and white. When natural beauty strikes all that is needed is to look.

A couple of days ago, before it started snowing, again, we were out scouting getting a feel for the area now that it supposedly Spring. We went down to one of the local spots just off the highway that we tend to go to quite often. It’s a nice spot to gaze at the Sherwins and right now they are covered ion snow. It’s one of the great things about Spring, dry roads and snow covered peaks. All this basically translates to good black and whites. We had good clouds that day obvious sign of an approaching storm. The whole time I was out there the thought of shooting in black and white made it real easy to get some good images. That only comes with practice.

Lately Dad and I have been stuck behind our computers working on this and that so we decided to get out for a little bit and try to do something with the snow that came in yesterday morning. Well after the two days of rain there wasn’t much left in the flats, but the Sherwins looked great.

I know i have said this before but it seems to be stuck in my head especially after this last weeks lessons on landscape photography, black and whites are hard. I keep working with them, to the point of just walking around with the camera set in monochrome to visually see without color. While photographing the Sherwin’s, trying to capture the magnificent light poking through the clouds of a thunderstorm, i was thinking about how to make the best image possible. Since the light wasn’t creating anything colorful it was a simple decision to shoot while thinking B&W perspective.

The god beams coming down were just spectacular, there really wasn’t any way not to make a good shot of them. Then there was one peak, Mt. Morgan and the cloud that had light on it. The entire peak stayed surrounded with dark clouds except for that one that kept getting brighter, until the opening disappeared and the light stopped coming through. It was a nice day.

For the last few days we have had great thunderstorms. When i drove back from Montana on Sunday we had a great one come through the Sierra’s and i managed to catch a part of it out at Benton Crossing. The grey mass was large enough that i saw it all the way at Tonopah, it was one big cloud. Of course it wouldn’t be complete without some great lightning, combined with some thunder to produce a good spring storm. A couple quick shots and a simple conversion to make a few images. 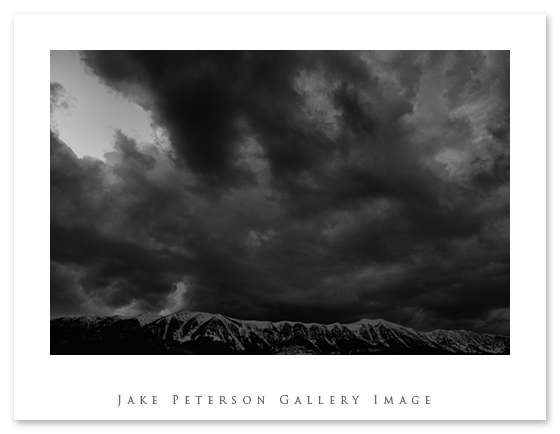 As i said i started out in the Bridger’s and worked my way back into town. Well this was the view at the beginning of sunset before any color really came in or any light for that matter. It wasn’t a very good spot to be, nothing was going to happen. 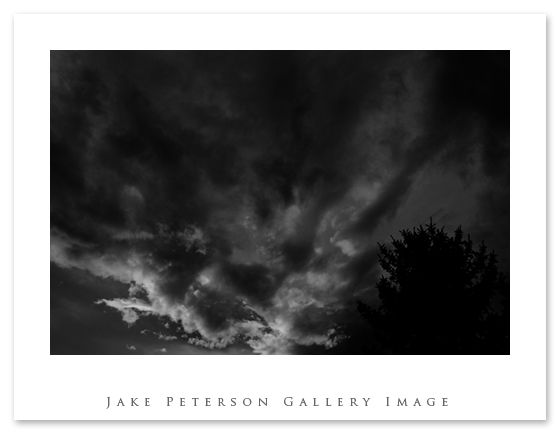 This was the view from town. It was much better. The light that came in made some nice glows and added a texture to the clouds. I like doing B&W’s like this, the glow that shoots out mkaing silheuttes is so interesting. Plus it was a bit of a challenge considering the lack of good trees and all the buildings that i didn’t want to enclose. Still missing something though. 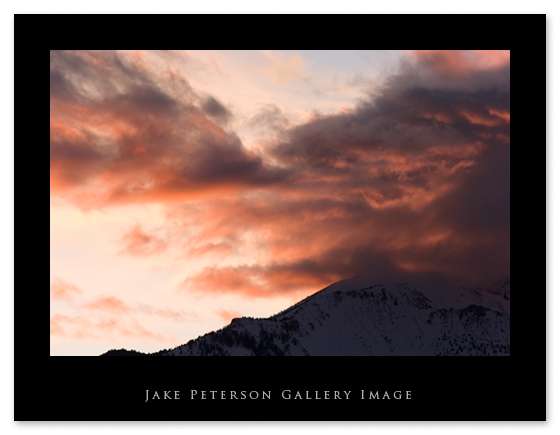 Last night Dad and I were out running some errands and caught the sunset. Living in the Sierra’s for so long we instinctively brought all our gear with us, knowing that we would need a close up lens to get around the unfortunate poles and wires. 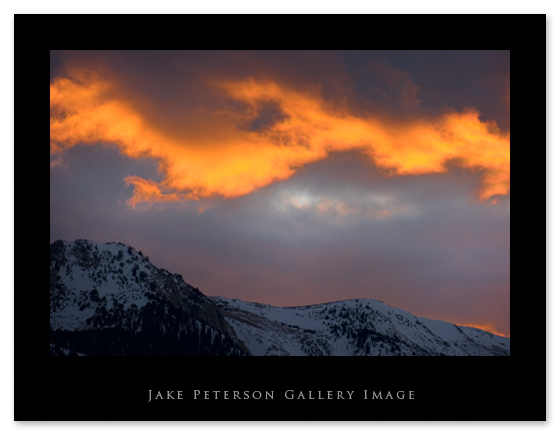 The whole sky lit up except forthis one spot. As you can see only a small sliver kinda like a flame scorching the sky was above the mountain range.