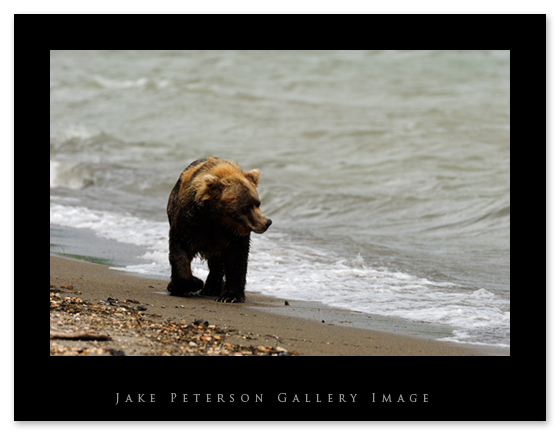 As i said earlier i can’t keep up with dad’s blogging. In fact I’m getting behind again. This post is from Tuesdays fun at the falls. It started with a very gusty morning. It was so windy that Brooks Lake, where the float planes normally land on, was churned up to the point that it looked like a bay and was impossible to land on. This made the salmon do kind of unusual things. They didn’t go to the falls and weren’t jumping. The bears therefore stayed by the lake shore fishing in the surf. Normally only the younger bears would stay by the shore, it wasn’t the case this time. This one bear walked the shore line, looking for the fish jumping. We couldn’t stay too long because the shore line attracts other people. 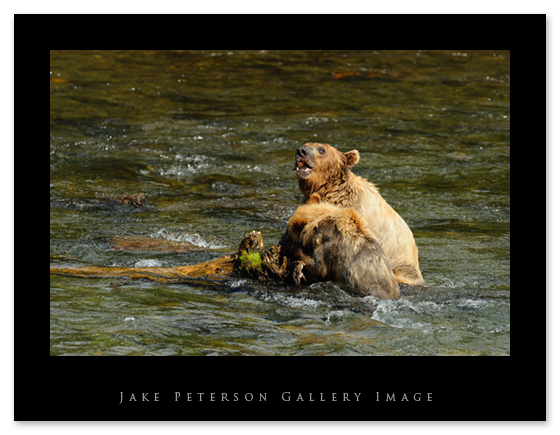 From the shore line to the lodge. The light is not as good at the falls in the mornings at Brooks. Everything is back lit and therefore not great for wildlife. This is good because that means we can spend the morning going through images and relaxing by the fire. The afternoon came around too fast, another walk to the falls is inevitable. We were expecting the falls to be quite active considering the previous days performance. We were wrong. The falls were pretty quiet, except for a few bears and this one female sow and her three cubs. 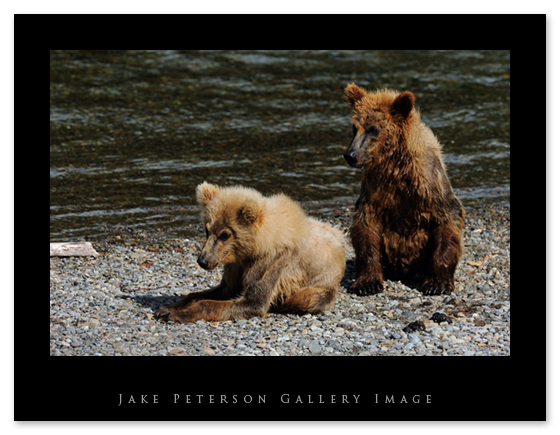 The cubs were about two years old and still pretty cute. There was one very aggresive bear, the one next to mom eating the fish on the log, and the other two were a little less. The one male kept stealing the fish away form the others. It was pretty funny to see. He even went after the bigger males when they caught a fish and he wanted it. The blondish cub was the smallest and cutest. We geussed it was a female but could never really find out. It was not aggressive at all and was very attached to the other cubs still. It would lay next to them and on them as mom fished. Speaking of mom, her fishing technique was rather unusual. She ran all over the stream and snorkeled and dived down. 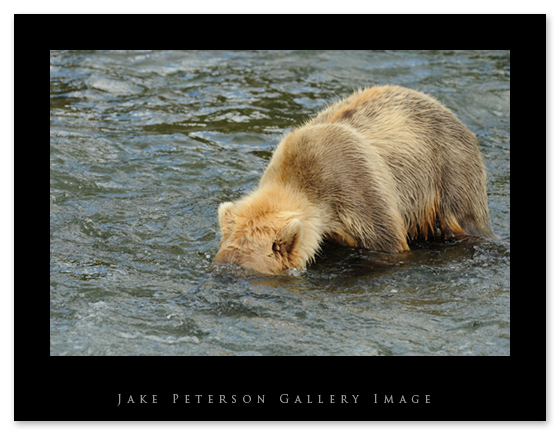 This is her snorkeling. It was kind of interesting, she was the only bear to dive consistently. The one pool at the foot of the falls was incredubly deep. We don’t know how far down it went but she would dive in it while another bear was sitting on a rock in front of it. She would come out from being completely submerged. A couple times she would catch a fish and her over aggressive son would come out eat the fish along side her in the pool. The four of them made the falls very entertaining that afternoon, what will happen now that salmon is off will be interesting.