One of the addiction that I seem to have inherited from my Dad is the overwhelming desire to purchase more books. There are worse ones to have but it can be an expensive addiction. Well I am constantly on the search for more of Montana’s Aviation History. I love reading about the pioneers out this way that you wouldn’t think about being Aviation enthusiasts. Now Montana is definitely a place where veterans come to retire but it’s not always the easiest getting a hold of them. On my travels one day I stopped at a local antique shop, gotta love those whole in the wall ones. In the basement, in the corner was the section on Aviation. That’s where I found these. 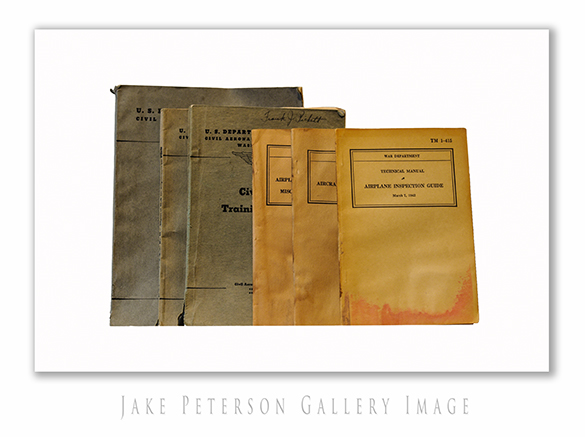 They may not look like much but in fact these manuals are a significant part of history that most people wouldn’t recognize. Three of these books are from the War Department on the maintenance of specific systems on aircraft. The other three are on Meteorology, Civil Pilot training Manual and a Digest of Civil Air Regulations for Pilots. Each one was published between 1940 and 1942. That’s old paper that usually doesn’t get saved. I mean there airplane maintenance manuals from the 40’s. It’s very important however that they do get saved. I’m not bragging because i know have them, I’m saying that as photographers we record history ever day and some days we even make it. Always remember to look beyond the obvious parts.

Now one of the really cool things about these books, as you can tell in the picture, one is signed. Frank J Pickett, which after some research done and this is unconfirmed, I found out that he was an Army Air Corps flight surgeon from 1942-1945. He went to bases throughout the United States, East Anglia, United Kingdom and even to Paris during the Battle of the Bulge. He started a family physician office right here in Bozeman until his retirement in 1976. He passed away in 1999.