I often get asked how I come up with such interesting shots when it comes to my planes. Well it comes down to two things, symmetry and perspective. Now there are a bunch of other little details like light and background but lets just focus on the first two. The reason symmetry and perspective are so important is because every plane has very distinct characteristics that no matter what light or what background they will always be there. Take this replica Zero for instance. This was shot with a D4 and 24-70 at f22. Now if you follow my blog then you know I don’t often give out f stops partially because unless you’re there, they are kind of irrelevant. This time it helps to prove a point. 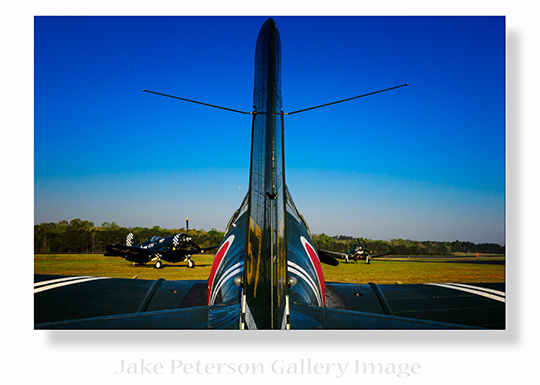 The Japanese Zero was one of the fiercest opponents in the early years of WWII. It helped Japan dominate the sky over the Pacific. It’s nimbleness was it’s greatest asset being able to out maneuver any plane for many years. It wasn’t until one crashed in the Aleutians and American engineers were able to rebuild the plane and study it that we discovered how to beat it. Well the fighter had many roles throughout the war two of which were fighting other fighters and the other was providing cover their carriers. Now every Japanese plane had the Rising Sun on the fuselage, also known as a meatball by American flyers. It made them very easily distinguishable. If you look closely at this photo you will see on the right above the wing an SBD Dauntless Divebomber. It’s purpose was to drop bombs on various targets, mainly ships as it was a carrier based plane. The Zero’s job was to shoot those bombers down. On the left side above the wing is an FG-1D Corsair one of the primary fighter in both Marine and Navy groups in the Pacific. These two were natural enemies. Fighters vs Fighter. Now granted both served in various roles, the Corsair being more effective than the Zero in bombing runs but for now we’ll just stick with fighters. Shooting from the tail, with the planes lined up on either side, it was real easy to get a simple and clear story in one photo. The enemy plane going after the bomber, the bomber being protected by it’s top cover fighter, the Zero breaks off and goes after the fighter. How do you come up with these shots? You come up with interesting perspectives to tell the story.