For all you aviation enthusiasts out there, if you have ever been interested in crash sites then this is one that you might have heard of. In 1979 a C-46 Commando went down in Churchill after an engine failure caused a forced landing. The plane was set down just shy of the runway being unable to maintain altitude and power. No one was killed but two were seriously injured. At the time the flight was carrying some pigs which is how it acquired its affectionate nickname. Today it still stands at the end of the runway, or at least what’s left of it. 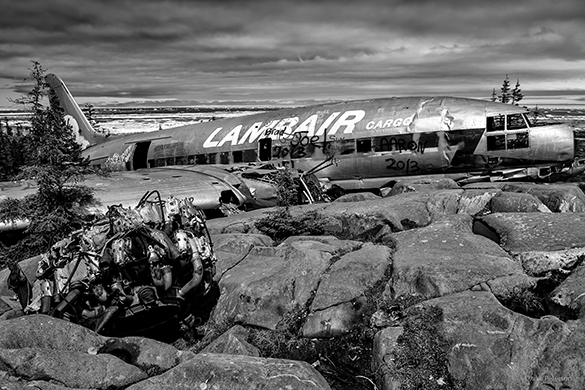 Over the years the wreck has become a spot of interest for photographers and tourists that come to Churchill. Apparently it is also a spot for the locals as the amount of graffiti seems to increase. There are lots of little details on the plane and the surrounding area so everything from going tight to going wide is an option. I used the D5 and 24-70 AF-S for this shot to include the engine because that created the story, that’s what caused the crash and turned this plane into a landmark.