Maybe it’s just me but I found that there has to be priorities when it comes to image processing and when that comes up some images get pushed back and others forward. Well after Dad and I did the Super Corsair shoot for the Epson Finish Strong Campaign, some of the images that i took sat for a while before I was able to get to them. These are a couple of those. 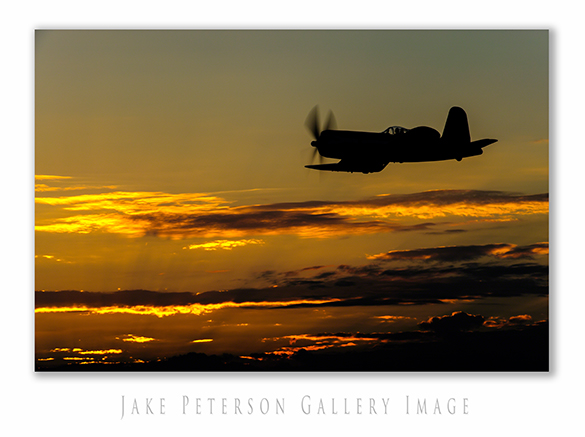 Although my focus was entirely on getting the image for the ad, there were times when i could just shoot to shoot. One of the most important things to do while conducting an air to air shoot is to give the pilots a break. The mental and physical strain on both pilots, more so on pilot of the subject plane, to keep the aircraft looking good in the photos and safe is a lot. A simple couple of minutes to relax is a big thing up there. In those few minutes of relaxing is more than enough to get a couple of shots with the second body which happens to be the D4 and 70-200 VRII. 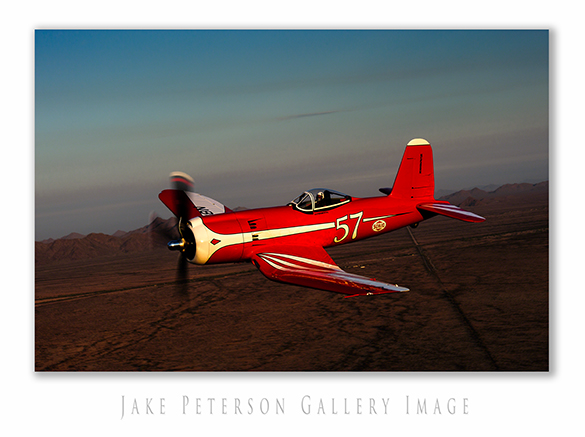 Of course there is also the way back in which provided some good shooting time too. One thing to say about this plane above all others is that no matter what the background is, the plane sticks out.

This past Friday a good friend in the Aviation World was lost. Robert Odegaard was the best damn pilot in the sky and also the nicest. You will be missed by all who knew you Bob. Blue Skies and Tailwinds…. 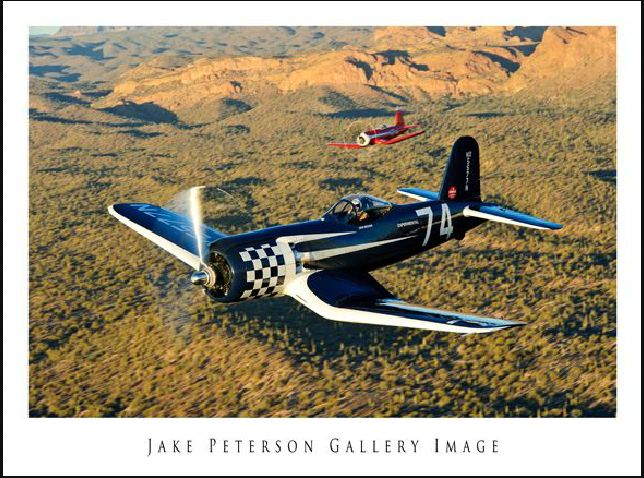 For a year my http://www.moosepeterson.com/blog/2012/09/04/epson-finish-strong-campaign/Dad was talking about this day. Going over details and details down to every rivet in the plane and letter in the contract. It was a long trek through lots of paperwork and constant revises of aircraft but finally on July 1st 2012 we went up in the skies and made history once again come to life.

The target for the day was to do a shoot that we had never before attempted. We were going to photograph the F2G-1D Super Corsair, of which it is the only of it’s model flying with the exception of an F2G-2 Super Corsair. Combined there are only 4 survivors left in the world. That wasn’t the tricky part or the new part. We were going to do the shoot Air to Air, still not new, with the objective of capturing shots not only of the plane but of the photographer inside the photo platform photographing the plane. Yikes! That’s the new twist. When my Dad asked me to be apart of this for none other than the Finished Strong Campaign For Epson. I was blown away and scared out of mind. How the hell were we going to do this? The first step was the planes. Amazingly enough the hardest part in most shoots, the photo platform, was the easiest to get a hold of.

The next challenge was the subject plane. With the idea behind the whole Ad as big, powerful, fast and beautiful no ordinary plane would suffice. After a long list of plane ideas they landed on the Super Corsair. With the Pratt & Whitney R-4360 engine powering this beautiful beast it was fast, new paint made it beautiful, and the fact that it is the only one of it’s model left made it unique. I won’t go into all the details about the plane in this post but you can read more about in a previous post I wrote in last January. Our good friend and pilot Larry Perkins was once again at the stick of the Super, no better place to be. With us for the shoot was our test pilot Scottie, Kevin pilot and owner of the Bonanza.

5:15, the light wasn’t up yet. We were awake and waiting for the sound of the engine to turn over. The crews, the spectators and the pilots were for what was to come ahead. The briefing we had rehearsed the day before was buzzing around in my head as last minute checks. All gear was in place, planes were ready and the cameras were on. With a quick crank and loud bang the giant blades of the Super Corsair began to turn as the engine started up. The R-4360 was coming to life. We saddled up in the Bonanza and 15 minutes later we cranked over. The Bonanza didn’t need as long as a run up time as the Corsair did. Down the private air strip we went with the Corsair in tow we headed out to the Astraea Mountains. The temperature had cooled slightly and thankfully was below the 100 degree mark. It was enough to keep the air slightly less bumpy. The heat was a factor in the shoot. More heat meant more dense air which slowed the planes down and caused more unsteadiness with formation flying.

For 90 minutes we flew over the mountain range. From the East side to the West we made orbits around both covering every angle of the plane we could out of the starboard side of our shooting platform. Back, Forward Up and Down the Super Corsair was constantly being moved in order to get as many useable images as we could. The flashes were firing away and the cards were filling up. This shoot mattered more than any other, there was no other chance to get it right it was this morning or nothing. After 90 minutes of flight time, both pilots hungry and tired we headed back to home base. We had our debrief on the ground, uploaded the cards and did the one thing that we all were anxious to do, look through the images. 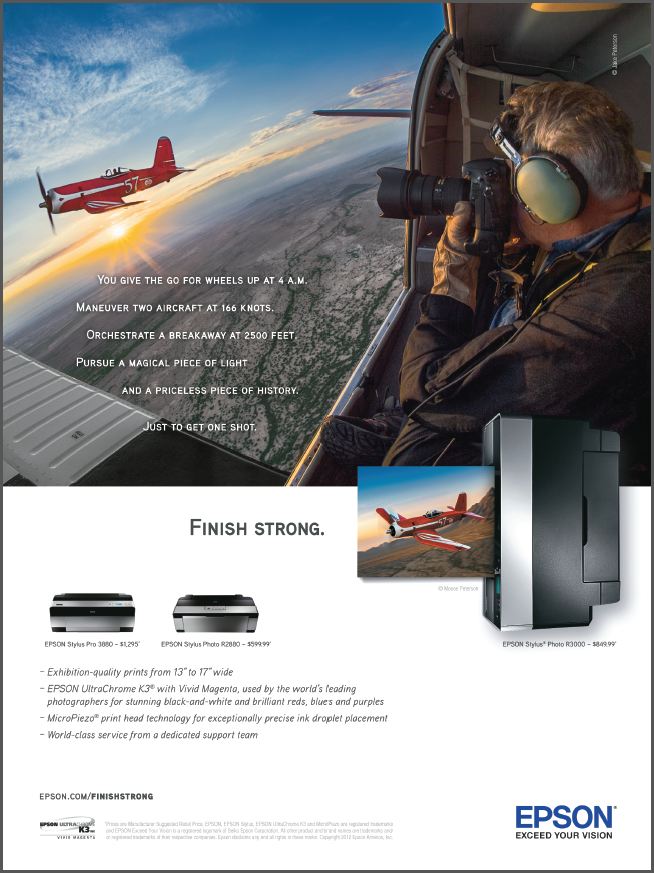 The results speak for themselves.

My Thanks to all those that made this possible: the Epson marketing staff, special thanks to Dano Steinhardt, Larry Perkins, Kevin Crozier, Scott Foster and of course my Dad and Mom for making this happen.

After the high of flying with two Super Corsair’s and the 10 hour drive back home, exhausted barely begins to describe how tired Dad and I were yesterday. Processing through images was quite difficult with tired eyes, but well worth the time. It was one heck of a flight and a moment of history that I will never forget. The Super G’s flying together in the afternoon light, shinned like no other flight I’ve done so far. Dad and I were in an A36 Bonanza, he first seat which is closest to the door and i was second seat, behind him. Every time I wanted to shoot I would have to look around Dad’s head. It’s still very doable for getting good shots but it does have some limitations.

The planes moved in and out around the Bonanza, as Robert and Casey flew different formations for us to get the shots we wanted. I say wanted because this wasn’t a flight for business reasons, nor for teaching others, but it was a flight that needed to happen for those passionate about Aviation. Air to Air flights happen all the time, but a flight that has two of the three remaining Super Corsair’s, the only two that fly, is something that probably won’t happen again. It took tremendous effort from all those involved to bring these planes together, my Thanks go out to them.

It was weird see people’s reactions to the planes as they were parked outside the hanger on Tuesday. The CAF Arizona Wing had a good crowd while we there, people shuffled in and out all day. Both Super G’s were parked outside and anyone there could go up and look at them. Dad and I watched in amazement, wondering if any of those people new how rare a sight they were witnessing. I overheard some say to their kids that they were Corsair’s but beyond that nothing. They were witnessing two planes brought together for the first time since 1949, and they probably didn’t even know it.

One of the best parts about working with planes and pilots is every now and then the opportunity arises to go photograph something truly unbelievable. Dad and I headed down to Arizona to photograph a rare bird, the F2G-1D Super Corsair. This particular plane, commonly known as “57,” due to the race number of 57 on the fuselage, was a former Thompson Cup competitor at the Cleveland Races. After a long, tough history of racing, rotting and revival it is now back to it’s former glory with a new paint job brilliantly shinning in the afternoon light.

This is pretty much the most basic of shots i could have come up with, but due to the warm afternoon light on the candy apple red paint job, it just makes it seem like so much more. For this shot i was using the 70-200 VRII and my D3, got down low and shot at angle to the plane. The great thing about where we were was the people were so nice that they moved the plane to face the light. It couldn’t have been any better.