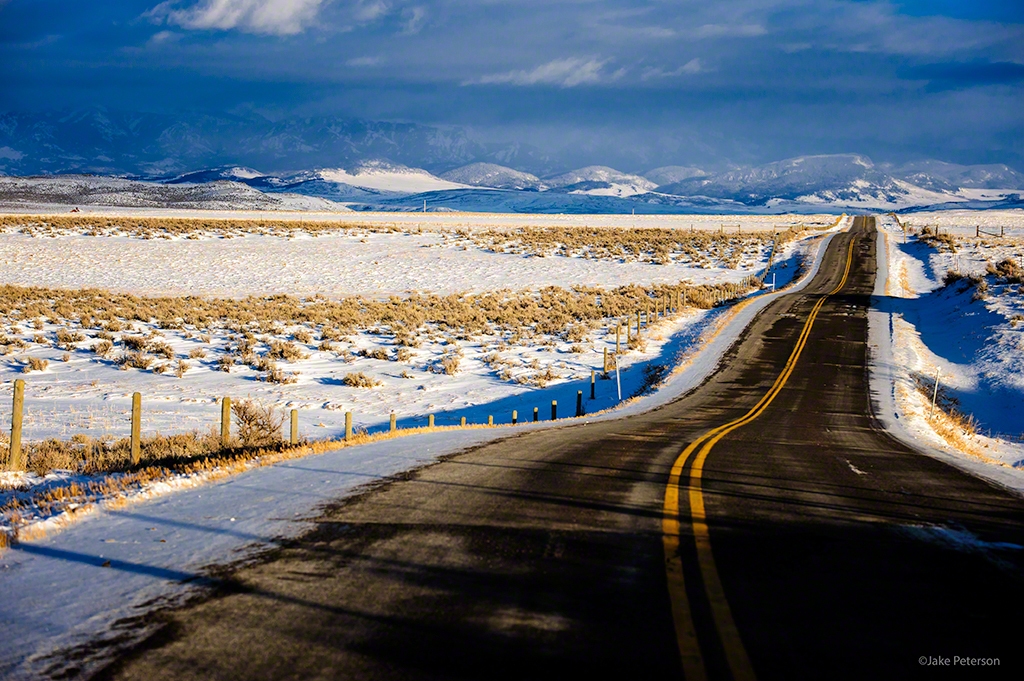 I’ve spent a lot of time in the winter, both indoors and outdoors, and I know that going out with the camera gear can be a little daunting. I mean you have to go out in the cold, leave the nice warm indoors, potentially get all your camera gear wet and who wants to do that? Well, there are some great opportunities in the snow but one of my favorite ones comes in between the storms. Snowstorms tend to have really dramatic clouds but then it’s also really dark so the drama can get lost. In between the storms can bring in new light which can make those storm clouds just pop not to mention the landscape. 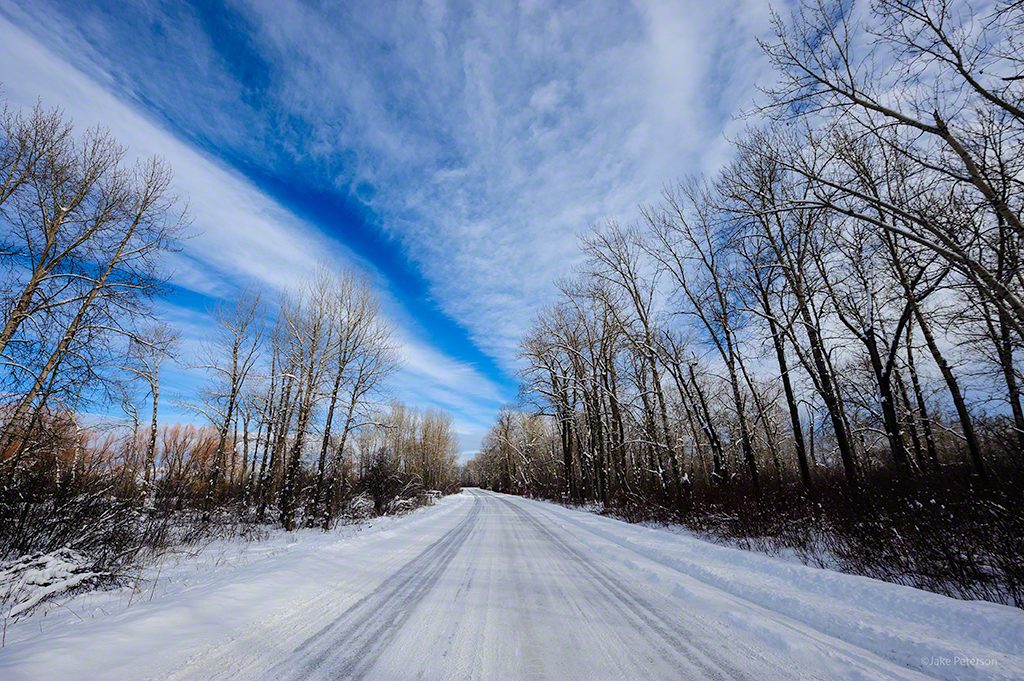 Yep, that’s about the size of Bozeman right now. While we usually get a cold snap every January, this February has been just one long cold month. It’s hard to get out and do stuff in this kind of weather, for even the nicest of days are often the coldest. Thankfully there is always something to do behind the scenes when it comes to photography.

Every new year people make big goals that they want to accomplish and usually after a couple of weeks people are having trouble. Well today is the last day of the January which means a whole month of goals being met or broken is already up. If you’ve been making your goals happen then this post may not be for you but if you haven’t then keep reading. 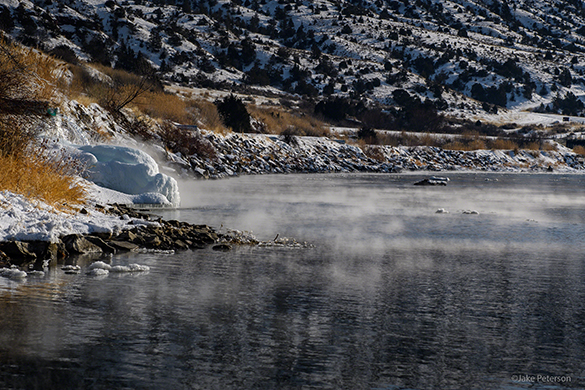 The key to making your goals come true is to keep trying. It sounds cliche but sometimes the best logic is the old logic. Keeping your goals simple leads to a greater success of completion and then when one is done you start another small one, then another and you keep going. By the time the end of the year rolls around you’ll have accomplished a lot. In Photography this is especially true. You can’t just say, “I’m going to take the best shot of my life this year.” That’s a goal that is completely out of anybody’s reach but something simple like, “I’m going to shoot for a little bit each day or every other day or I’ll dedicate my Saturday to shooting.” Something simple that is achievable is the best way to success.

It’s an interesting feeling chasing the light. It’s a mixture of anxiety as you try to find that subject that captivates the day and then when you find it there’s a sigh of relief and a feeling of satisfaction that the hunt wasn’t wasted. Then of course there are the chases that end in nothing, you go home empty handed. How do you conquer those days? 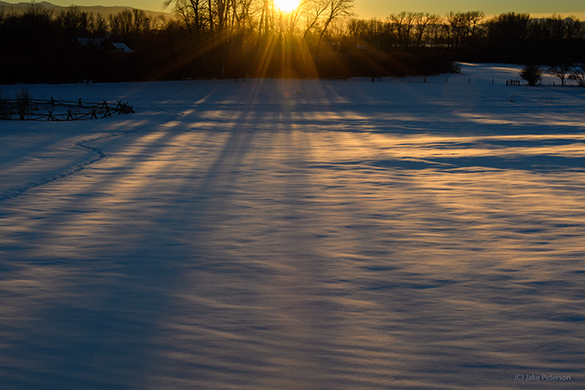 The only way to come back with something is to keep pushing forward. You push and push until you find something, even if that means driving around until the light is gone. With the warm temperatures finally coming through the valley, bird activity has picked up, especially with raptors. While out looking for a subject, which ended up in a goose egg, I saw this one shot. The day was almost over and the light almost gone but there was enough left for one shot with the D5 and 70-200 VRII. Chasing the light sometimes means doing exactly that.

I absolutely love steam! Steam is a very graphic element in nature and it can be shaped and molded in so many different ways. Light is the best way to mold and if you watch geothermal spot all day you’ll see how different the steam looks throughout the day as the light changes. It’s a great way to learn about light. Well this past weekend it was quite cold with the highs in the teens. That seems to be the trend lately. It was also a good day to be out on the river since it was sunny. When you have below freezing temperatures and blue sky sunny days, the combination results in a drastic change in temperature between the surface of the water and the air temperature. This creates steam, which creates some great photography. 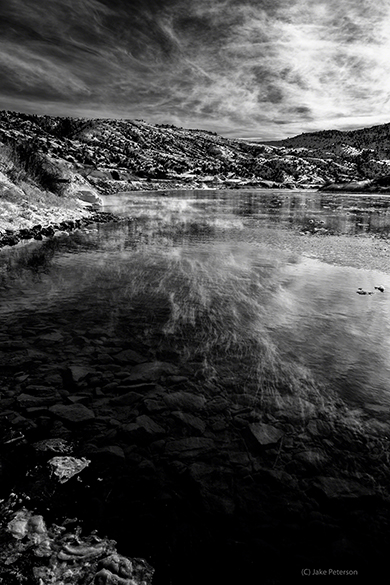 Now I’ve been going to the Missouri River for a few years now but I have never seen this amount of steam before. It was just insanely gorgeous. Since I was shooting landscapes I kept a basic setup, D5 with 24-70 f/2.8. I did close down a bit to bring out more detail and depth in the steam. Then in post I using SilverEfex Pro, I was able to really bring out the detail in the steam using the structure slider.

It can be hard at times to find the motivation to get out shooting. You start thinking about having to drive somewhere, the time it takes, the work you haven’t done, the other things you could be doing, etc. We’ve all been there and we all struggle with it. But the simple fact is if you don’t shoot everyday then you’re not pushing yourself. One of the best ways to keep pushing yourself is to shoot out your window. I’m sure some of you might be saying, “well I live in a city.” Well one of my favorite photographers spends more time shooting from his roof then anywhere else and he lives in a city. If you’ve ever seen a Jay Maisel class then you know he spends a lot of time photographing New York from his roof and it seems to have worked out pretty well for him. 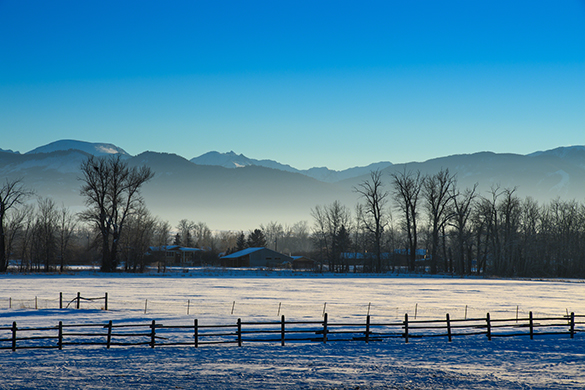 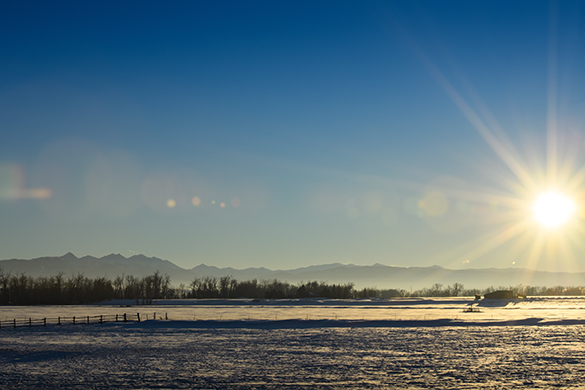 Why not? Shooting from your house or office can be a good way to breakup the monotony of the day and keep your skills sharp. Will you get a great photo that will make you lots of money every time? No probably not. Then again if you’re in this business then you know that’s not really a reality any of the time. The point is to stay sharp throughout the week when you’re stuck at work. These shots I took outside my window. Are they the best? No. Did it feel good to be holding a camera after hours on the computer. YES! These were taken with the D5 and 70-200 VRII. Nothing special in the camera and nothing special when it came to finishing. Just a quick way to think through the process and keep the mind sharp.

That’s right I found a new barn! Okay it’s not earth shattering news but for me it’s kind of exciting, for a couple of reasons. First off I love photographing barns. Each one tells a different story and they are an iconic symbol of the west. They symbolize settling down in a new area and making the most of the land. That’s why I love composing with as much open area around each barn as I can. Second this is a barn I could work, which is important because many I can’t. 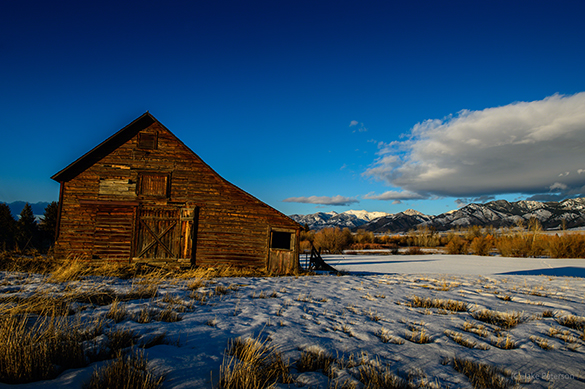 Now this barn, while it has character, had a couple of challenges. The biggest being that it was on the corner of a busy intersection. Great place to be standing and shooting right? I got a lot of looks that afternoon. It was worth it. But it did make for some challenging compositions because there was so much town that I really didn’t want in the background. One shot simply wasn’t enough to get the real background that was needed.

The answer was a two image Pano. Now you might be asking why not just go wider? Well for two reason. First this was shot at 24mm and with that road behind me, I couldn’t back up. Second, if I did go wider that would bring in more sky which was boring at that point. All of these little details I was thinking about when I was making those clicks and it’s what you need to do too. Now I mentioned the sky not being great, which means I’m not super thrilled with this image. It could be better. But now I know where the barn is so I can go back, which is another important lesson. 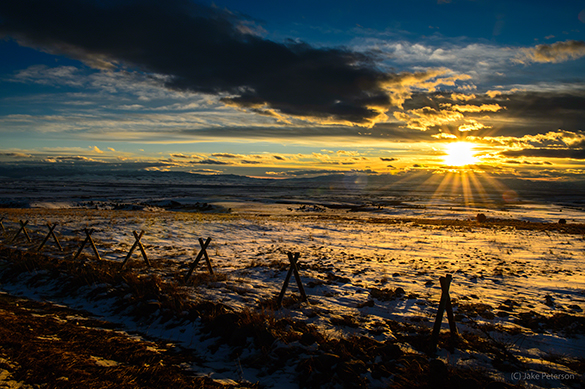 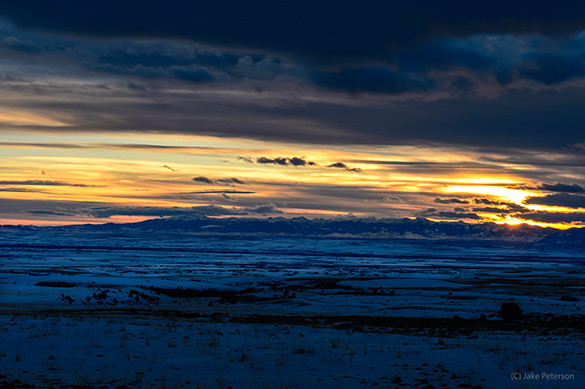 Well it’s Friday again which means it’s time to finish up all those weekly tasks so that this weekend came be spent outside shooting. It looks to be a pretty good weekend weather wise here in Bozeman which is good! Here is a little something I shot over on the Gallatin River to get you through your Friday. 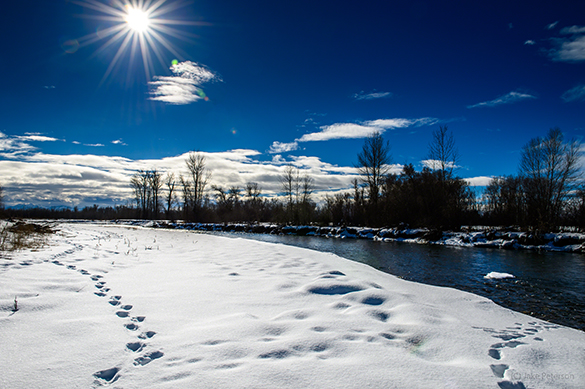 The little details do make a big difference and it’s important to pay attention to them all. When I went out on Saturday, the temperature was quickly rising after the storm on Friday, but the storm created these great ice rings on everything. Those ice rings created lots of simple small subjects that were just kind of interesting. The other factor that made everything interesting was the blue skies overhead and direct light on the water. Those two elements allowed for no color cast on the water and more vibrant colors to pop out. Simple things that tell the story of how nature works. 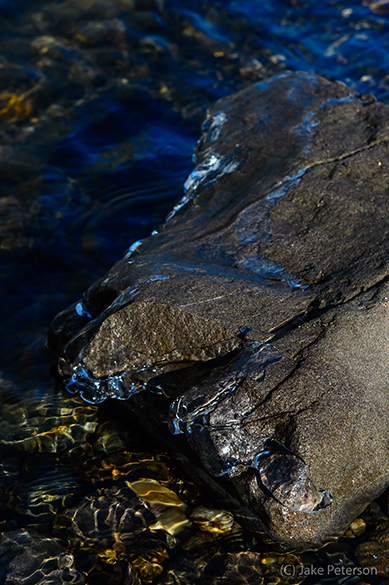 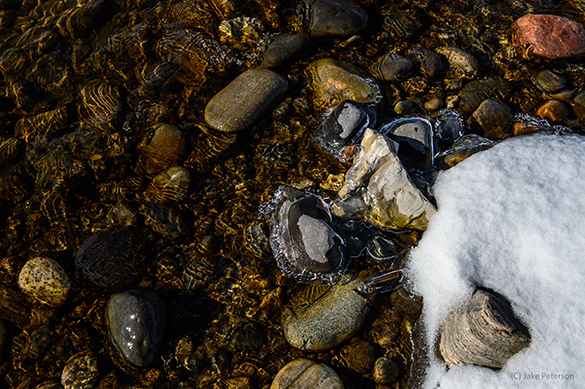 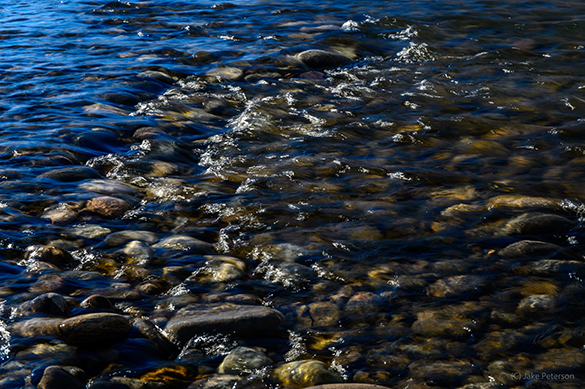